This is an impressive, fetching coffee-table book. A lovely gift for the ultimate Harry Potter fan/connoisseur. Filled with illustrations, film stills, behind-the-scenes shots, photographs and descriptions of every creature in the Harry Potter realm.

On unicorn: “While serving a late-night detention in the Forbidden Forest, Harry Potter and Draco Malfoy find an injured unicorn in the process of having its blood drained from its neck by a cloaked figure. Unknown to them, it is Voldemort in a strange form, who has been drinking unicorn blood to keep himself alive.” 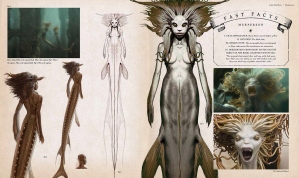 On the Merperson: “In traditional folklore and artwork of mermaids, there is a noticeable break between their human and their fish halves. But for the merpeople in Harry Potter and the Goblet of Fire, the designers distributed the fishiness throughout the being’s anatomy to craft a composite creature.”

On Dobby: “A beloved and unique creature, Dobby, introduced in Harry Potter and the Chamber of Secrets, was the first fully computer-generated major character in the Harry Potter films. Dobby went through many design iterations before the bat-eared, soulfully big-eyed, pointy-nosed house-elf emerged. The designers took into account Dobby’s background as servant to the Malfoy family, and so he was given a pasty, sallow “prisoner of war” appearance, enhanced by grimy skin and little or no muscle tone. His hunched posture reflects his years of abuse at the hands of the Malfoys.”

Author Jody Revenson has written extensively about Harry Potter, Jack Sparrow, the Disney theme parks, Dick Grayson and Bugs Bunny. Some of her other Harry Potter books include Wizard Wear, Muggle Attire and Ten Years Later: Life on Set with the Harry Potter Cast and Crew.

The gorgeous and somewhat mysterious purple leatherette-bound book provides details into the film-making magic that thrilled [and continues to thrill] so many fans of the Harry Potter series. If you want to know the how, why, what, this is where you’ll find answers. It’s an essential addition to someone’s collection.

This entry was posted on November 6, 2014, 05:31 and is filed under Books. You can follow any responses to this entry through RSS 2.0. Both comments and pings are currently closed.