The latest release from Cowboys Junkies is the band’s fourth and final in The Nomad Series. It’s called Wilderness, covering a vastness befitting such a title. The others include: Renmin Park; Demons and Sing in My Meadow. Formed in 1985, Cowboy Junkies is: guitarist and songwriter Michael Timmins; bassist Alan Anton; singer Margo Timmins and drummer Peter Timmins. Cowboy Junkies toured earlier this month and I caught the show at the Somerville Theater. One of the best performances I’ve ever seen. Just stunning. Lovely. Mesmerizing. And Margo is extremely charming with her between songs chit-chat. 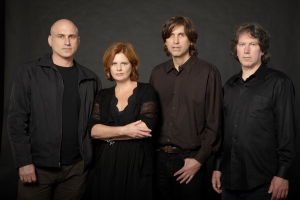 I spoke with bassist Alan Anton.

Amy Steele: How is the live show different from what someone would hear on the albums?

Alan Anton: The live thing has always been a different experience. We tend to jam out and do different things. We only do that on the road. So it’s something to look forward to.

Amy Steele: You’ve been together since 1985 and it sounds like you brought everyone together.

Alan Anton: Michael and I had been a couple of bands before and both ended up in Toronto. We wanted to start something else. His brother and sister were interested and we went from there.

Amy Steele: What’s it like to be in a band with siblings?

Alan Anton: I’ve known them so long. I’ve known Michael since kindergarten. They’ve been around forever. It’s kind of a natural thing.

Alan Anton: Toronto’s always had a great, vibrant music scene since the 60s, I think– the Neil Young and Joni Mitchell days. It’s always been a draw for everybody living in all the rural bits of Canada. Which is most of Canada. If you’re in a band and on the East Coast you end up in Toronto. There are a lot of venues that support live music and a lot of opportunities for bands to be heard. It’s never really gone away. For the last 50 years it’s been a fantastic live mecca as well as a recording city as well.

Amy Steele: How would you explain your longevity as a band?

Alan Anton: We still enjoy what we do in terms of making the music. As long as that’s happening, as long as everyone’s still able to do it, we’ll keep plodding along.

Amy Steele: What has been the greatest challenge for the band?

Alan Anton: Just the family thing really. Once we all tried to have kids and try to live a normal life when you’re still doing this rock n’ roll thing. When we have to tour and are away. We try to keep our outings a lot shorter than in the past.

Amy Steele: How has the band changed or grown over the years?

Alan Anton: We’ve become better musicians. We really couldn’t play our instruments when we started. We were very limited. It was a punk/D.I.Y. attitude that we had. That’s the main thing. We can play a lot better and that’s opened us up to more interesting ideas that we wouldn’t have considered before.

Amy Steele: Did you ever expect to be in your fourth decade with Cowboy Junkies?

Alan Anton: I don’t think any band thinks that. You’re lucky enough to be around the next year usually.

Amy Steele: Do you ever put a label on what you play?

Alan Anton: We always considered ourselves just a weird band. I guess Alt-country. That works just as much as Americana. We felt we didn’t really fit anywhere but other people thought it was cool and liked it.

Amy Steele: If you didn’t fit anywhere then how’d you develop a fan base?

Alan Anton: It was interesting. We’d play afternoon show with punk bands. We’d come on and play these long slow songs. It was weird but it worked. It was a kind of a late 80s thing to have a lot of weird bands on the bill. You’d have a straight country player and then the next guy would be a hard-core thrash metal band. It would be all over the place. We played a lot of these shows with a whole gallery of bands that had nothing to do with each other except trying to re-invent rock music.

Amy Steele: Are there any bands/ artists you like to listen to now?

Amy Steele: As far as songwriting, Michael goes away and writes songs . . .

Alan Anton: He’ll go away and write songs—the lyrics and the melody format. Acoustic. And we’ll try to figure out as a band what kind of grooves to apply to it to make it work. And then we’ll take it from there. Then Margo comes in and works out the vocal end of it. Sometimes we come up with jams and musical “stuff” and write songs to them later. We’re all involved in the process. 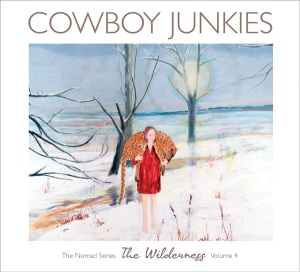 Amy Steele: Where did the idea come from to do this Nomad series?

Alan Anton: We had some songs and didn’t know if we’d do a double-album. Then Mike went to China with his family and came back with a whole bunch of other songs. We just set a goal of four records in 18 months.

Amy Steele: What do you like about the entire series?

Alan Anton: I like how they all have their own personalities. They all sound a certain way and have a certain vibe to them. I like the content. I’m really happy with the Vic [Chestnutt] record [Demons] because we never thought we could do Vic sounds because they’re kind of quirky. Also Renmin Park was something we hadn’t done before, to start with a bunch of loops and sounds and drums and add to that. I was very happy with that. Wilderness is melodic and simple. It’s about being in the wilderness, whether in work or life, navigating through it and trying not to get lost.

This entry was posted on March 30, 2012, 01:43 and is filed under Music. You can follow any responses to this entry through RSS 2.0. Both comments and pings are currently closed.