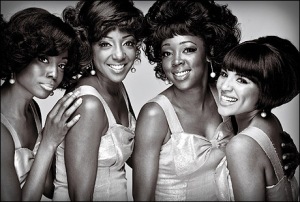 –originally formed in 1958 in by four friends: Shirley Owens Alston Reeves, Doris Coley Kenner Jackson, Addie “Micki” Harris McPherson, and Beverly Lee. They were all students at Passaic High School in New Jersey
–The Shirelles debuted in 1958 at New York’s famed Apollo Theater
–first major female vocal group in the 60s
–first girl group to have a number one single on the Billboard Hot 100
–crossover phenomenon with white audiences
–successful in Britain with Will You Love Me Tomorrow (1960)

listen to: Will You Still Love Me Tomorrow?

–wrote their own songs and also provided early hits for Brill Building songwriters like Gerry Goffin & Carole King, Burt Bacharach & Hal David, and Van McCoy
–hits include: Soldier Boy; Will You Still Love Me Tomorrow; Dedicated To The One I Love; Mama Said 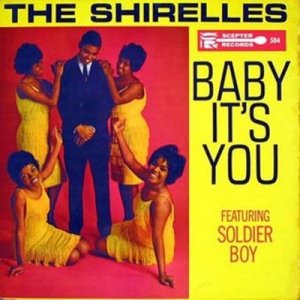 —The Shirelles earned three gold records and were named Best Female Group in Billboard and Cash Box for five consecutive years.
–In 1983, for the group’s 25th Anniversary, The Shirelles received a citation in the Congressional Record.
–headlined the first integrated show in Alabama
–performed for Presidents Kennedy and Johnson
–The Shirelles work for AIDS and USO fundraisers and the Mental Health Association in Passaic (NJ) County for which Beverly Lee has served on the Board of Directors.
–inducted into the Rock and Roll Hall of Fame in 1996

This entry was posted on March 8, 2011, 01:00 and is filed under Music, Women/ feminism. You can follow any responses to this entry through RSS 2.0. Both comments and pings are currently closed.