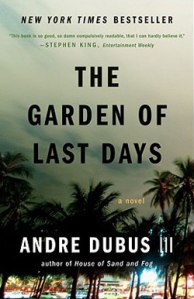 Did you see the Academy-Award-nominated film The Fighter? It took place in a violent neighborhood in Lowell, in the Merrimack Valley. That’s the kind of environment Andre Dubus III grew up in. Instead of becoming a boxer, he wrote his way out of this crackling, exasperating, scary and often limiting environment. These are the types of towns where the success stories, unfortunately, are few and far between. Someone is more likely to be stabbed, end up in prison or die of a drug overdose than become a best-selling novelist. TOWNIE is a memoir about how violence shaped Andre Dubus III as an author when he discovered that the pen is mightier than the fist.

Summer came and now windows were open and there was Larry’s yelling, there was a woman yelling back at him or somebody else in another house, there was the canned laughter and commercial jingles of six or seven TVs, there was a bottle breaking, a drunk singing, a motorcycle or lowrider revving its engine, then peeling away from the curb, there were the smell soft hot asphalt, the dusty concrete of broken sidewalks, cat shit and dog shit and gasoline, there was the wood baking in the lumberyard near the Merrimack, again the faint smell of sewage and motor oil and mud, and when the wind blew in from the east you could smell the ocean, dead seaweed and open seashell and wet sand . . .

The Dubus family moved around quite a bit in a scrappy sort of way. A philandering alcoholic who abandoned the family when Dubus was 10, Dubus’ father taught at a small community college and married several times. Although he only lived a few towns away, the infrequency and the nature of his relationship with his children added distance. As his mom worked in Boston, there tended to be much delinquency, drugs and parties. Due to the wild appearance of their house, a neighbor once remarked to another her surprise that mom Patricia, the struggling caregiver, sounded educated. Dubus has two sisters, Suzanne and Nicole, and a brother, Jeb. Dubus may not have had parental guidance as often as he desired but he certainly had an enviable connection with his siblings. They confide in each other and protect each other.

Food was scarce now. Even with our father’s child support payments, only a few hundred a month, my mother just didn’t make enough to keep the fridge and cabinets stocked. It was hard enough keeping the rent paid on time, the electricity on, the phone. .

Growing up in drug-addled, poverty-stricken neighborhoods, early on, Dubus decided that he needed to become physically intimidating and a competent fighter. The major catalyst is when he witnesses his brother Jeb getting severely beaten. Dubus starts lifting in his basement and later learns to box. He spends hours training—doing hundreds of sit-ups and pushups, bench-pressing. Fighting becomes one of his few satisfactory outlets for his pent-up anger and frustration. When Dubus fights, he cannot stop. He looks for fights. He craves the crunch of cartilage against bone, the taste of blood in his mouth and the satisfaction when a hook connects to knock someone down.

I kept seeing his face as I punched it. I still couldn’t remember feeling the impact of the right cross, just the sight of him dropping like a switch had been turned off in his brain, the blood gushing from his mouth, the shock in his eyes and how white his cheeks and forehead looked, how I kept swinging and would have hit him every time if the bouncer hadn’t stopped me.

Finally moving away from the area, Dubus majors in Marxist theory at the University of Texas. Drawn to his family, he returns to work with his brother in construction and at a halfway house. Then, instead of attending the Golden Gloves contest, he stays home in his little apartment and writes a story all day long. He’s exhilarated by it and feels as much of an adrenaline rush as if he were boxing. That’s when he decides he must write.

I grew up in middle-class Acton in the 80s and don’t feel a strong connection to my town. My brothers never looked out for me or stood up for me. College and graduate school were always the plan and that of 95% of my high school graduating class. Reading a success story like TOWNIE makes me slightly jealous. Who wants to read a memoir about life in a quaint little town like Acton? Would I want to have grown up in the Merrimack Valley? No. I don’t even venture to Haverhill or parts of Lowell today. I have no desire or need.

Dubus expresses his desires to please and impress his father from competing on the track team (his father an avid runner) to later when he and his father become “drinking buddies” to when Dubus is an adult and finally begins to write. His clear focus is to gain his father’s admiration. The most solid connection to his father develops after his father becomes disabled after a car accident. Perhaps in forgiving the father, a son can become stronger. Throughout TOWNIE, Dubus never sugarcoats their relationship but bluntly describes its nadirs and zeniths.

TOWNIE captures the darkness of violence and its impetus for Dubus’ later writing career. It fuels his desire to both protect himself and his family and to escape. As he struggles for identity and happiness, he finds the ultimate solution in writing. Whatever type of childhood you have, you’ll relate to aspects of this gritty, heartfelt memoir.