Posted by Amy Steele in Interview, Music on October 9, 2013

Punk rocker Tony White saw Grace Schultz– a bluegrass musician and gospel singer– performing and became smitten. Sometime later he asked her to jam with him. They hit it off and decided to meld their styles into something unique and fabulous which they’ve termed “punkgrass.” The now-married Tennessee duo writes gothic tales with an edgy, dramatic flair. Their debut album November [Rock Ridge Music] will be released on November 12. 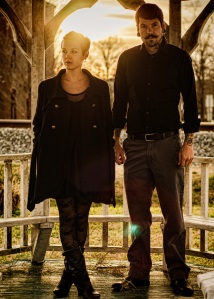 Amy Steele: When did you each start playing music and singing?

Tony White: I started playing guitar when I was 15 or so. Was handed off a few chords from my brother and just took it from there. Have always loved to entertain. Grace has been a natural performer her whole life. She has stories of drowning out the entire church with her voice when she was a little girl. She plays many instruments, but I think when her Paw Paw Shultz taught her the guitar, her desire to perform really began. He would be so proud…

Amy Steele: What drew you to music?

Tony White: I’ve always been moved by music. For as long as I can remember my life has been set to the musical soundtrack in my head. Grace uses music as a therapeutic way to cope with a lot of things in her life. Stress, studying, etc…

Amy Steele: Where and how did you meet?

Tony White: We had mutual friends through the years, but didn’t actually meet until I invited her for a jam. I had a bunch of leftover punk rock tunes from a band I was coming out of, and had seen (stalked) on the internet that she played banjo and mandolin. Our music and love has grown together.

Amy Steele: How does being a couple influence your music?

Tony White: I think raising kids, paying bills, and the everyday struggles of being married help form a strong bond as a duo. Though we fight like cats and dogs while we write, we try to remember to keep those disagreements out of our marriage. We are definitely starting to find our groove as a songwriting team, and have a great start on the next album already.

Tony White: We don’t have a certain formula. Sometimes in starts with a melody, sometimes it starts with a riff, you just never know. But I (Tony) tend to be more of a melody guy, and Grace is the more natural lyricist of the two.

Amy Steele: Where do your song ideas come from?

Tony White: We draw our ideas from everything we see around us. A certain mood, an event in our life, even books and movies. We try to avoid anything typical.

Amy Steele: When you recorded this album you worked with a full band. How do you usually write music/ perform and how was that different?

Tony White: With the direction of Lloyd Aur Norman (Producer) and Stephen Jones (Engineer) of Villain Place in Nashville, we decided the best way to present this group of songs on the album was to bring in players. Without the luxury of the live connection we make with the audience, we didn’t want to lose any energy. Had a great time playing with other musicians and would be surprised if we didn’t do it again on the next one. But live, it’s Grace and I against the world.

Amy Steele: How has your music changed in the last few years that you’ve been playing together?

Tony White: Whereas the first batch of songs were mostly pre-written punk rock tunes, the November album was written with a certain style set in place. We wanted to create something we would listen to ourselves, something different.

Amy Steele: In what ways do you use social media to interact with fans?

Tony White: Social media has been huge for us, because it’s a free way to make connections with your audience. We regularly do Q&A’s with our fans, as well as contest giveaways. We have made ourselves available and always respond to any email or question we may receive.

Amy Steele: What can someone expect from a Grace & Tony show?

Tony White: You can expect a stripped-down version of these songs that were written for two people, just the way they are supposed to sound. We love to make a genuine connection with our audience, before and after the show.

Tony White: For us it’s all about something unique. All of our songs are written in simple punk rock style formats, with hooks and harmonies. But it’s being unique that we strive for. We want you to leave the show feeling as if you just saw something new, and we want that same reaction after you hear a G&T song.

Amy Steele: Why did you name the album November?

Tony White: The album is named November because we met on November 21, 2010. And the rest is history. 🙂