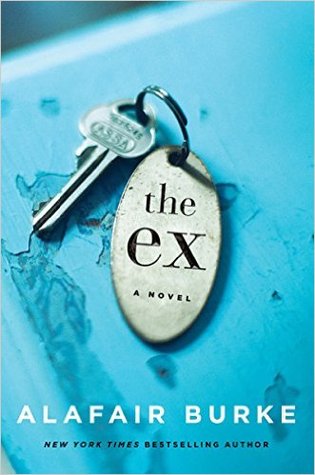 High-powered New York defense attorney Olivia Randall gets a call from her ex-fiancé Jack Harris, a successful novelist, after more than 20 years. They dated while she was in law school and were got engaged. An impulsive move for Olivia as marriage wasn’t truly part of her life plan. So she hurt Jack and they’ve never spoken until now. Jack sits in a jail cell accused of murder. Several years ago Jack’s wife died during a mass shooting at Penn Station. Can Olivia help him? As the story unfolds, Olivia isn’t even sure whether Jack is innocent or guilty but he’s her client and she’ll do what she can to make sure he never goes to jail. The Ex is an unexpectedly good thriller. Author Alafair Burke unravels the details of the mass shooting which devastated Jack and his daughter. She slowly reveals the events which caused the split between Jack and Olivia.

“For the first three years, Jack and I were happy. Being with him felt easy and safe, the way I always thought relationships should be but never were. But I should have known that a fear of losing someone was not the best reason to kick off a serious relationship.”

The character of Olivia Randall appealed to me. She’s a 43-year-old, never married attorney with no children and no desire to partake in either societal convention. Burke writes: “At forty-three, I knew by now that my natural expression when I was thinking—intense, brow furrowed, lips pursed—could be intimidating to most people. The Internet called it RBF: Resting Bitch Face. And, no question, I had it.” Olivia’s best friend and confidante runs a bar—an auspicious sounding board for Olivia as she sees all types of people visit her establishment.

It’s a thoughtful thriller which addresses many issues without wearing thin at any point. Burke covers hot button topics such as the criminal justice system, revenge, surveillance, wealth, depression and mass shootings. The reader may doubt Jack’s innocence as much as Olivia which keeps the pages turning.