in the realm: QUOTES

I never liked her. It’s a horrible thing to say, it sounds so snobbish and superior, but I never considered her my equal, or yours, frankly. Not because she’s not smart, she is smart, but she’s not at all . . . imaginative or interesting. Or maybe it’s just that she has no capacity for joy or wildness.

I was your genius in a box, but I wouldn’t stay where you wanted me, wouldn’t act the way you thought I should. You always had the moral upper hand. I was always in the wrong.

The Astral by Kate Christensen 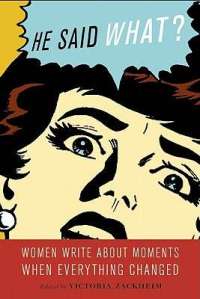 And who could want that acquiescence anyway? Where is the fight, the dance, the tease, the passion of the relationship? Is love so worthless that we give it up to be told what we want to hear?
From “Full Condom,” by Dianne Rinehart in He Said What?

It’s just hard for me to find the kind of girl I like in Chicago.
–Jessie in Jamie and Jessie are Not Together

I don’t need a blackboard or a classroom to set an example.
–Elizabeth [Cameron Diaz], Bad Teacher

He Said What?, Jamie and Jessie are Not Together, Kate Christensen, LGBT film, The Astral