Stella McCartney: “[Vegetarianism is] a philosophy of how you conduct your life and time on the planet. … One of the things I was taught growing up was, ‘Do unto others as you would have done to yourself.’”

Sarah Silverman: “When I was 9 or 10 years old, my dad took me over to a neighboring farm to help get stuff for the meal. The farmer, Vic, told me to look at all the turkeys and pick one out. I saw a cute one with a silly walk and cried, ‘Him!’ Before my pointing finger had even dropped to my side, Vic had grabbed the turkey by the neck and slit [the animal’s] throat. Blood and feathers went flying. I had sentenced that turkey to death! Up until then, I didn’t know where meat came from—and I’ve been a vegetarian ever since.” 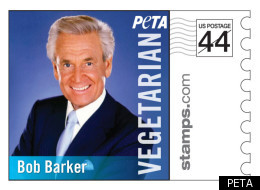 Bob Barker: “The answer to enjoying life is nutrition. I recommend that you become a vegetarian and exercise if you want to enjoy the golden years. … I became a vegetarian about 25 years ago, and I did it out of concern for animals. But I immediately began having more energy and feeling better.”

Edie Falco: “Once you’ve seen [the undercover factory-farming footage], you can’t pretend you didn’t. It’s over. The stamp is in my brain, and the idea that we commit such atrocities against animals—it will be our fatal flaw as humans, I think, to not bring the situation to light and stop it.” 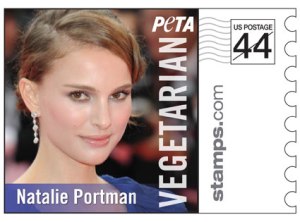 Natalie Portman: “Eating for me is how you proclaim your beliefs three times a day. That is why all religions have rules about eating. Three times a day, I remind myself that I value life and do not want to cause pain to or kill other living beings. That is why I eat the way I do.”

Sir Paul McCartney: “If anyone wants to save the planet, all they have to do is just stop eating meat. That’s the single most important thing you could do. It’s staggering when you think about it. Vegetarianism takes care of so many things in one shot: ecology, famine, cruelty.”

Morrissey: “I think animals look to humans for protection, and of course humans lead them into slaughterhouses, which to me is just like an image of leading children into a slaughterhouse. There’s no difference.” Morrissey’s stringent views on vegetarianism inspired his album with The Smiths’ titled Meat is Murder.