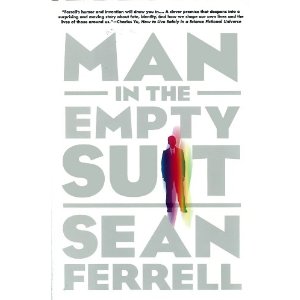 Opening sentence: “It is unfortunate for me that I am, by most any objective measure, a genius.”

A fantastical novel that’s simultaneously foreign and futuristic in its imagination. Confusing and quixotic. Transported 100 years into the future a time-traveler celebrates his birthday with versions of himself—the Elders, the Youngsters, Seventy, the Drunk, the Suit, the Inventor, Yellow, Screwdriver—when he finds his future self’s corpse thus stumbling on an intensive mystery to reverse this morbid doomsday. Swarming with Me’s and paradoxes. Author Sean Ferrell utilizes a particularly dry, sharp tone when describing the time-traveler interacting with alternate versions of himself. [“Things hadn’t ended well. I sought refuge in a crowd of myself. Of course, I found none, no compassion, no support.”]

“The four of us had our own death to prevent, but each of us was too myopic to consider anyone but himself. Each of us in that room was a ball of self-centered anxiety, a nervous animal waiting for the opportunity to claw. Yellow, twitching with panic, kept himself at a distance, his arms folded defensively.”

Man in the Empty Suit generally zips along in a smirking way. The birthday party with all the Me’s being the clear focal point to the novel. Soon the central time-traveler leaves the party to investigate the shooting and the mysterious female party guest. He’s transported into a dark future where people trade work for sandwiches and roam a wearied Manhattan with dilapidated buildings, lacking hospitals and reliable public transportation. The connection to his dead self appears to be the woman at this part so he manages to entrust himself into her life and into her equally beguiling situation. She’s an actress assigned a role by a dying man. The role of his dead daughter. He wants to remember and re-enact happier days. Of course the role-playing becomes rather murky for both parties.

As the ensuing mystery lagged further out I felt myself aching for the interaction between the Me’s and less undercover detective work. If Ferrell focused on the Me’s I’d be much more satisfied. I’m compelled by some of these Me’s. How’d they get the various nomenclatures? Who are they and where are they time-traveling to and from?

FTC Disclosure: I received this book for review from Soho Press.

Too Bright to Hear Too Loud to See: book review

“That I have been forced into a holding pattern cause rage to rise in me. My tsunami. My chest constricts and I am painfully aware that suddenly, inexplicably, there are tacks and shards of glass circulating through my veins.”

Writing about mental illness is not easy and not often done well. Few manage to make others understand the grit, the pain, the self-effacing letdowns and challenges one suffers as a result of mental illness. You have to write about mental illness with depth, respect, enough clarity, descriptiveness and plenty of humor. Dark humor preferable. In this rapid-fire read, author Juliann Garey provides the reader with a full senses assault, harrowing lows and ridiculous highs.

Making the character Greyson Todd a Hollywood studio executive proves the perfect career for someone hiding his bipolar disorder for decades. Being selfish, arrogant and wealthy. Great coping mechanisms for denial. His father also had been mentally ill although no one knew that at the time. [“The fundamental tools of agenting—lying, manipulation, and negotiation—usually acquired over decades—were skills that came naturally to me. It was what I’d done to survive growing up in my father’s house.”] Amassing enormous wealth allowed Greyson to take off and travel everywhere and then settle in New York without worrying about working. He just worried about everything else.

Quite cleverly, Garey tells Greyson’s story through 12 30-second electroshock treatments. She interweaves each chapter with moments from Greyson’s winding global travels when he let his bipolar illness manipulate him, his memories of his unhappy childhood and struggles with the present and being in the moment and learning to live with this illness. Sadly, Greyson leaves his wife and eight-year-old daughter to travel the world before he’s admitted into a psychiatric hospital a decade later. It’s rather poignant when his college-aged daughter visits him in the psych ward and they start to mend their broken relationship and piece together memories that ECT may or may not have shattered.

FTC Disclosure: I received this novel for review from the publisher.

bipolar, Juliann Garey, Soho Press, Too Bright to Hear Too Loud to See