Just Like Bad Sex, SATC: The Movie Left Me Empty and Disappointed 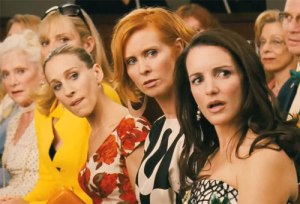 This film was directed and written by a man, Michael Patrick King, and it’s supposed to be representative of women? Yikes! It’s like the former SATC writer having such success and being on Oprah with his book “He’s Not that Into You.” It’s because as women, we have to realize that there is something wrong with us that we are single after a certain age. I speak to my therapist about it all the time. It’s unfortunate.

It’s okay to be over 35 without a boyfriend or husband but Hollywood does not want to show that of course and people don’t want to see it. Why else would people dress up to see this film and go get cosmos and make a whole girls night out when they don’t see another film for months at a time (in the theater)? I could go on and on but I won’t. Hey, it happens. Do I always want to be alone? Not really. Would I like to have sex 4-5x/week. Absolutely. Did I think I would be turning 39 without a boyfriend? Never.

SATC: The movie was predictable and pathetic with few laughs or witty moments. There are moments here and there that are worth seeing but it’s really just an extremely long episode of a half hour sitcom. The one-liners fall flat. There’s little creativity. The highlight of the film are the outfits. I commented more than once on a dress or bag I liked.

I enjoyed the television show and was a fan– what I appreciated was that Carrie did not end up with the guy and the ring at the end. When I heard about the movie and that there would be a wedding I expected mediocrity which is what this film is.
But the film and show has always been about Carrie Bradshaw and her thoughts on dating and mating: she’s always been in search of the guy and her happy ending. She made it seem like she’s doing it independently but when you’re always writing about sex and dating and reading magazines and shopping and coveting shoes of all things, it’s hard for any guy to look at you and say: “Wow that Carrie is independent.” There was an episode once where Carrie needed to buy her apartment and Miranda pointed out that she probably could have purchased it with the amount of money she spent on shoes (as most of her shoes cost at least $400/pair). Charlotte ended up helping Carrie out.

Four years after the series ended and all the girls are happily settled. Miranda (Cynthia Nixon) and Steve live in Brooklyn. She still treats him like crap and bitches about how much work she has to do and also has to take care of their son. Charlotte (Kristin Davis) is married and a full-time mom as she’s always wanted to be. Her husband, Harry (Evan Handler) is decicedly cool. Charlotte’s constant companion is her three-year-old adopted Chinese daughter Lily. The girl is like a prop. Can’t Charlotte do anything without her? She’s wealthy and must have a nanny. Miranda has a nanny for Brady. Samantha (Kim Cattrell) is on the Left Coast managing the career of Smith. He loves her, she loves him but as she says quite astutely “I love you but I love me more.” She finally realizes she cannot have her life revolving around a guy. Then there’s Carrie who thinks her life does not revolve around a guy but it actually does. She has managed to write three books about dating and love.

Big buys an amazing penthouse so that he and Carrie live there together and she freaks out. Now, I have nothing of my own to fall back on. There’s the bitter split of a mistress and her beau and the Christie’s auction at the beginning to show that women need to get married to protect themselves financially. Big makes a casual marriage proposal which Carrie finds rather cool.

Then suddenly it’s snowballing into an enormous event and then Big is Big and he bails. There’s the Page Six announcement and then Carrie’s spread as
“the face of 40” in Vogue and also Big’s realization that on his third marriage he’d rather not have a big blowout. Carrie and friends recoup down in Mexico. Carrie takes to bed for days. And yes, after a breakup one might collapse for a while. But Big has done this so many times to Carrie that who didn’t predict this from the first mention of a betrothal? Everything works out in the end with Carrie and Big marrying at City Hall with Carrie wearing an vintage off-white suit and not the elaborate Vivienne Westwood gown. Kisses and cosmos all around.

Oh, and the friend a went with? A 46-year-old single mom of two, said she nearly cried a few times because the movie made her (and women in general) feel they may never find love over a certain age yada yada. Kudos to Sarah Jessica Parker and Michael Patrick King for making tons of money with this tripe.

Sex and the City: the movie is like putting on a pair of fabulous Chanel gladiator sandals without getting a pedicure. There’s just something amiss. Sure there’s mild entertainment scattered throughout. It’s fluff: empty calories.

STEELE RECOMMENDATION: WAIT FOR NETFLIX (IF YOU’RE A FAN, YOU’VE ALREADY SEEN IT)