there’s something off-the-reservation wild [and inherently sexy] about this show about U.S. Marshals in Kentucky. It’s quite masculine. It’s a male-dominated setting but there’s nothing sexist about it. Timothy Olyphant superb. Also I enjoy Alicia Witt’s turn as a bold, kick-ass law student who keeps defending her deadbeat trouble-maker redneck brothers.

medicine in the early 1900s. I’m in. It’s early days at the Knickerbocker hospital in Manhattan.

generally I don’t like sci-fi however this series about clones fascinates me. Plus Tatiana Maslany vividly acts out all the clones. They all have peculiarities that make it fun to watch. 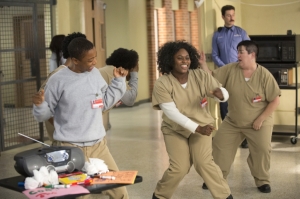 Orange is the New Black

everything to say about this show has been said. diversity, humor and pathos. 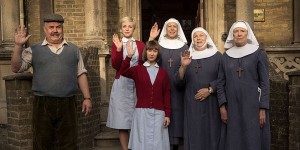 Child-free by choice. Never wanted children. No interest in being pregnant but this female-centric show is wonderful. written by women, directed by women, centered on stories about women. friendships and careers.

almost over and it’s as brilliant as ever.

a twitter friend asked me how this show was and I said it was complex and confusing. Stylish and powerful. In college I majored in Political Science and English. Took a class called The Arab/Israeli Conflict. That helps a bit. Maggie Gyllenhaal is phenomenal. All the women are power players and run this show from Gyllenhaal as CEO Nessa Stein embroiled in the Arab-Israeli conflict to Eve Best [Nurse Jackie] and Janet McTeer and Lindsay Duncan.

Sarah Lancashire is a genius. Here she’s a police officer in a small UK town. See also: Last Tango in Halifax a sweet and funny show about an aging couple who rekindle a high school romance.

flawed and caring Jackie. the outstanding Edie Falco. excellent writing by women because honestly who better to write such a layered, complicated female character than women.

Dry comedy about the day-to-day in a rehab facility. Aging and death couldn’t be handled any better than this. Maybe I can relate because I’ve worked in healthcare/eldercare. It’s smart and the troupe of actors including Niecy Nash, Laurie Metcalf and Alex Borstein is fantastic.