“all men should be feminists. If men care about women’s rights the world will be a better place. We are better off when women are empowered – it leads to a better society.”
–John Legend

“I do call myself a feminist. Absolutely! It’s worth paying attention to the roles that are sot of dictated to us and we don’t have to fit into those roles.”

“My mom brought me up to be a feminist. She was active in the movement in the 60s and 70s. The Hollywood movie industry has come a long way since its past – It certainly has a bad history of sexism, but it isn’t all the way yet. It’s important to acknowledge that there’s a lot of patriarchy and sexism in mainstream movies.”
–Joseph Gordon-Levitt

“Women are responsible for two thirds of the work done worldwide, yet earn only 10% of the total income and own 1% of the property…So, are we equals? Until the answer is yes, we must never stop asking.”
–Daniel Craig

“I’m usually good about my temper, but all these men trying to control women’s bodies are really beginning to piss me off.”
–Eddie Vedder

FILM: September/October films on my radar

The Rum Diary
starring Johnny Depp
based on novel by Hunter S. Thompson
— an American journalist working in Puerto Rico during the 1950s seeks a balance between island culture and the ex-patriots

Margaret
starring Anna Paquin, Matt Damon, Mark Ruffalo, Allison Janney
–a woman witnesses a bus accident and the question of whether or not it was intentional affects many people’s lives.

overlooked DVDS: Bug and Half Nelson

Aggie [Ashley Judd] is a waitress at a lesbian club in Oklahoma. She is all “stay away/ don’t mess with me” tough on the outside and vulnerable/ “I’ll crack at any moment” on the inside. Ashley Judd plays these types of characters with such an innate ability to give the audience something from a dismal character. Aggie has a lousy ex-husband [Harry Connick, Jr.] who has just gotten released from jail. She lost her son a decade ago. She bemoans her “miserable existence of laundromats, grocery stores, marriages and lost children.”

Bug literally crawls under your skin and takes hold of your mind as you figure out what is it about this film. This dim setting is not likable or relatable. At first, it just pricks you, then it burrows.This woman is so lonely that she asks a Gulf War veteran [Michael Shannon] she just met to stay with her? Are we to believe this? Turns out he spent years in a hospital [in the mental ward of course] and believes he was tested on.

The acting and story makes it credible and the film quickly turns into a paranoid vision of terror and oblivion. The sighting of a bug turns into a big cover-up, an issue of trust or consequences and a genuine fear. It connects bugs to the CIA, the military, Unabomber Ted Kaczynski, Oklahoma City bomber Timothy McVeigh and Jim Jones Temple’s People! Sometimes funny and sometimes downright creepy and bizarre, Bug is not a film for everyone (the other two people in the theater with me did not like it). I laughed out loud at the absurdity and cringed at the possibilities. It is that effective and completely original.

And Ashley Judd. I don’t know what to say about this phenomenal actor. I love every film she does, every role she takes. She would be a dream to interview. This gorgeous, self-assured woman is able to become the most desperate of characters [please put Come Early Morning on your netflix queue]. She delves in and does not let go. She embodies this icky, questionable woman and makes her complex and layered. Aggie is a survivor.

It is not that Bug is super deep or philosophic or existential. At the beginning I was even thinking “what is going on?” and then bang! It blows up and out and over and it’s fantastic. 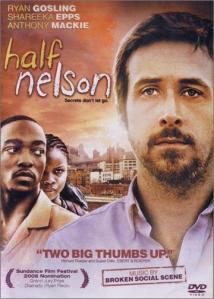 In Half Nelson, first time feature film director Ryan Fleck presents a metaphor for life’s challenges. This wrestling hold puts you in a compromised position and it is difficult to release from it. A drug-addicted junior high school teacher (a subtle and focused Ryan Gosling) forms a strong friendship with one of his students, Drey (Shareeka Epps). The end result is a somber yet realistic story.

In this role, the talented Gosling (The Notebook, The United States of Leland) turns in a quietly moving, haunting, riveting performance as this intelligent teacher who finds himself stagnated and questioning his impact on society. It is entirely relatable.

Who has not felt that way at one point? Why do I do this job? Do I matter as one individual in the overall schematics of the world? Everyone else seems to be moving along, as one should. People seem happy, settled, and comfortable. The inner-city characters are real. He plans to write a book but never gets around to starting it. His ex-girlfriend is engaged. His parents reminisce about their glory days protesting Vietnam and other issues of the 60s. During a family dinner, the mom even puts on “Free to Be You and Me” while getting drunk and dancing around with her sons. Even his students are more focused than him. Drey learns of his secret double life and forms an alliance. She’s wise beyond her years, being a latch key kid and having an older brother in lock-up.

Epps makes a solid, innately natural first-time acting debut. Fleck interposes quiet moments with quick hand-held camera shots to weave the story. His directorial approach is entirely effective as the ending is left open, allowing filmgoers to leave the theatre in deep thought or in intense conversation regarding the numerous provocative elements within the film-Dan faces the difficulties of making a difference, of advancing one’s life and of doing enough.

Dan is a fully functional crackhead, has a novel teaching approach and is a favorite among his pupils. Yet he has many dark, insular days and darker nights. He is a troubled soul that cannot often get out of his own mind or change the sheets on the bed.

Half Nelson starts slow but is gritty and honest in its portrayal of a flawed individual who strives toward living the good life.

buy at Amazon: Half Nelson