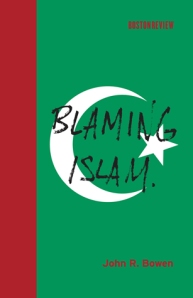 The title and cover immediately drew me to this little book. Islam remains a mystery to many of us in the Western world. Where does the line blur between Muslim immigrants and Islamic extremism? Is this a multi-cultural issue or an issue of assimilation? Author John R. Bowen attempts to answer some of these questions while also raising new ones. There’s a chapter on Sharia law. He’s well-steeped in the topic. He mainly focuses on Europe and right-wing parties with their swiftness to blame Islam for the wrongs in society. In what I consider to be quite brilliant, France requires its free French courses as part of an “integration contract” and Germany provides free German lessons to those granted work visas. Surely that helps to connect people. Blaming Islam is a brainy and stimulating read.

–there’s a “growing conviction among some Germans that Muslim immigrants are inassimilable.”

–Britain’s PM Cameron stated: “we have encouraged different cultures to live separate lives, apart from each other and apart from the mainstream.”

–Hizb ut-Tahrir is “a group that rejects participation in British politics and urges British Muslims to prepare themselves for the coming of the Islamic state, to be created somewhere in the world in the not-too-distant future.”