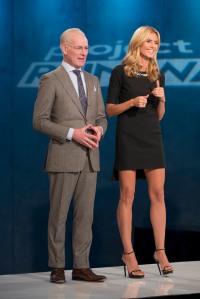 For a Project Runway first there was a rainway—rain on the Runway—and the designers used waterproof materials. 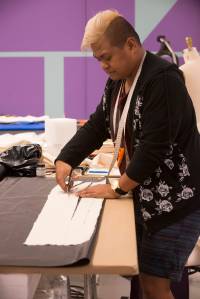 Kini notes that after three times being in the top “It’s time to win.” 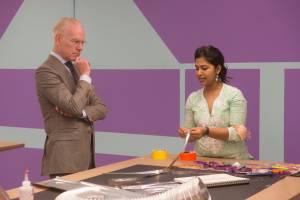 Tim is dubious [a favorite Tim Gunn word] about Sandhya’s multi-color striped jumpsuit. “You need some counterpoint to this very colorful jumpsuit,” Tim tells her.

Fade breaks down. Having a very difficult time getting motivated for the challenge. Foreboding here when he tells his partner he’d be home “soon.” 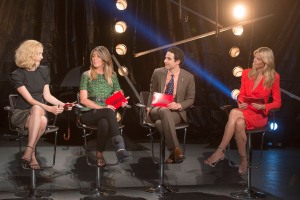 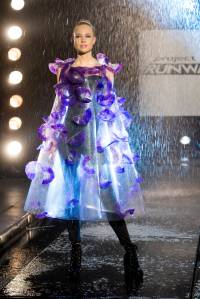 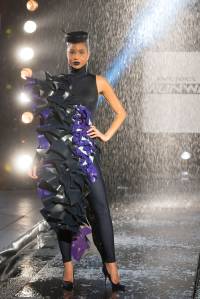 “I like the dominatrix-esque look.” –Caitlin Fitzgerald
“I thought this was sublime. I was very dramatic.” –Nina Garcia
“You did a wonderful job. You’re so talented. You have great technique.” –Zac Posen 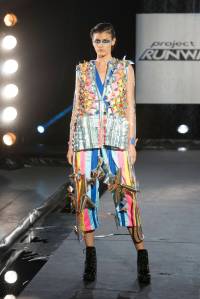 “Your look made me feel very happy. It has your handwriting on it.” –Heidi Klum
“You have such a strong signature, it comes through.” –Zac Posen
“I like this however it’s at the surface of looking circusy and child-like.” –Nina Garcia
“The dangly bits I could do without.” –Caitlin Fitzgerald 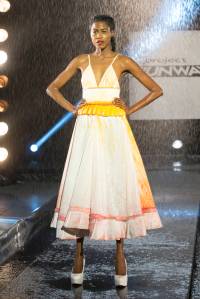 “I love how this dress came alive in the rain. It’s a special moment you created.” –Heidi Klum
“When it’s effective like this it’s exceptional.” –Zac Posen
“This took my breath away on so many levels.” –Nina Garcia

“I was not very impressed with this look.” –Heidi Klum
“Looks like something I’d make for a Halloween costume.” –guest judge and Masters of Sex star Caitlin Fitzgerald
“It looks lackluster.” –Zac Posen 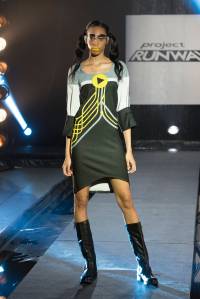 “Putting a play button on your dress doesn’t make it look modern or techie, it just makes it look gimmicky.” –Nina Garcia
“I like the graphic nature and the elements you had working with it.” –Caitlin Fitgerald

“I felt like a cliché of a fashion show. The shapes aren’t strong enough. It feels flimsy.” –Zac Posen
“It wasn’t cohesive.” –Caitlin Fitzgerald
“It’s so cliché that it’s too predictable.” –Nina Garcia

After the judges’ critiques the designers compare notes backstage and note that Alexander McQueen got referenced a lot. Sandhya says that she never gets compared to any designers. Amanda interviewed: “I don’t know what why you’d say that it feels so insensitive.”

SEAN and KINI are dual WINNERS.
FADE is OUT.