Easter made it through the winter and nearly to her 41st birthday. As anyone in New England knows it was a long and arduous winter with tons of snow and ice. She slipped and pulled a stifle muscle in March, hurting her already weak left hind leg. Several years ago she tore the tendons on that leg when she got caught up in a fence. She used to be able to come and go into her stall at night as she pleased. After that accident, a walkout was built for her. She then was closed in at night into her stall and walkout combo.

She also got tick bites year round and may have had Lyme disease again because she certainly had neurological issues. After the stifle pull she received several steroid shots because she’d been walking askew but then seemed to be doing better, eating a bit and happy. But then I saw a few days when she was just melancholy and not herself. On Monday she seemed okay but not great. She wasn’t eating and was out in the conservation field by what I call the “death tree.” It’s as far as she can get away from anyone. At night she didn’t want to come in. The next day she never got up and had to be euthanized. 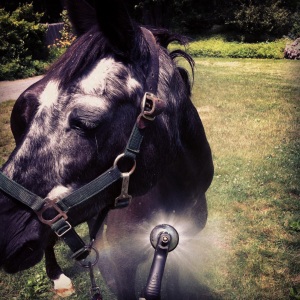 This pony. We owned her for 32 years. My parents bought her for me when I was 12. Easter was 8. She was a registered Welsh pony. 13.2 hands and was running in a herd of other ponies when we bought her. But she always had an independent spirit and was an individual. She did her own thing. No matter what. I’d been riding a few years and was in pony club and 4-H and competed in shows and events. Riding and having ponies and horses can be a sign of privilege for many but I missed out on many things. I didn’t participate in school activities because equestrian events were year-round. So when you show up at a high-school reunion and no one remembers you because you weren’t on the soccer team or involved in theater but were a competitive equestrian no one really gets it. Not even in my community. Easter helped me through the dark days of junior high when I was an outcast: alone and unpopular. Not that I’m that popular now but I’m an adult and more equipped to handle myself than during the pressure-filed years of junior high.

I wrote this poem about Easter that was published in Highlights magazine:

My pony of the darkest black,
Let me hop upon your back.
We’ll fly off into the sunset together,
Floating, like a feather.

My junior high English teacher joked that he hoped to never read another poem or story about Easter again when I left his class. 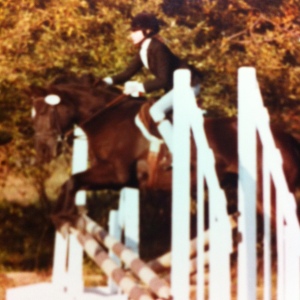 after winning Weston pace event with my friend Pam Cheney and her horse Chip:

We got along well because she was independent, smart and sassy like me. Being a registered Welsh pony she was hearty and that’s why she lived so long. When I was sad she knew I was sad and would be there for me. She’d stalk me sometimes. She was patient if I just wanted to cry in her mane or hug her. She was a pretty good listener at times, a good companion.

Easter taught many other children to ride when I outgrew her, which I quickly did. She loved children and despite her independent spirit was quite patient unless a child wasn’t that experienced or paying attention. I went on to ride Cricket and then I owned Senator Scythe, a registered Quarter Horse. I rode in horse shows and competed in eventing– dressage, x-country and stadium jumping. My mom kept Senator when I went off to college. When Easter became too old for lessons and showing, my mom took her back to be with Senator. Unfortunately Senator had Cushing’s disease and he died in 2005. Easter moved to another barn and that mare died several years later of Cushing’s as well. Easter stood over her body all day. 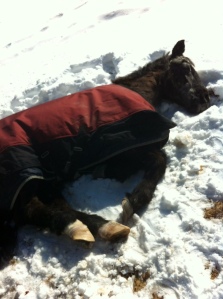 This pony was unpredictable for the most part. If you expected her to be one place, she was another. If you thought she was in, she was out or if you thought she’d be in one field she’d be in another. She followed the sun like a sun-dial– smart as she was black and would be warm and comfy all day. She loved to lie flat-out and take naps even in the snow. After snowstorms she’d get right out into the fields and make paths for herself. 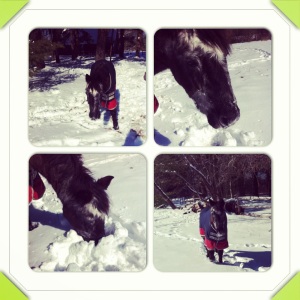 If I lay down she’d come over, sniff me and nuzzle me to be sure I was still breathing. Some days you could barely drag her in from the paddock and other days she’d be waiting for you in the walkout at 4:30 for her dinner. The days she’d knicker hello you knew she was in good spirits. Sometimes she just wanted to look out of her stall.

Easter served as the neighborhood watch pony. She watched the kids across the street get off the bus and go in the house. Stood like a sentry at times watching over bikes and cars passing by on the street. She knew who came in and out of the driveway. She recognized my car, my mom’s and the people who owned the house (they fed her every morning and let her out). The guy across the street and the older lady a few houses down liked to come over to visit Easter. She was quite popular in the neighborhood. Easter shared her fields with a blue heron, deer and occasionally fox kits. Never phased her. She just went about her business and they went about theirs.She loved to be the center of attention. Why wouldn’t she?

She spent her last day down for about eight hours. When I arrived mid-morning she looked at me and nickered. She tried to get up several times but her legs had just had it: 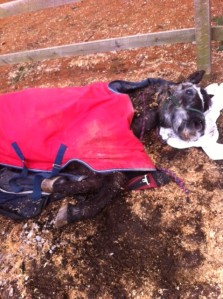 I wanted Easter to live to be 50. I wanted her around forever but I also wanted her to be happy and healthy. I’m lucky for every moment I had with her. I just hope she had a good last few days before she died. I hope I made her happy in the last years of her long life.

Posted by Amy Steele in Uncategorized on April 22, 2013 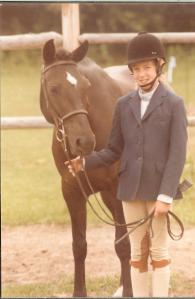 Posted by Amy Steele in Uncategorized on February 23, 2011

Shiny and black with a white star on her lovely face,
Easter knows what she wants and big horses treat her with grace.

Welsh Mountain is her breed.
Why the name Easter? She happened to be born on the holiday on April 22, 1973.

This Welsh mountain pony is rugged, sometimes stubborn, more often sweet.
She doesn’t mind being out in rain, snow and sleet.

Amy took Easter swimming, on long trail rides and to shows.
She also brushed her as kittens, a-top Easter, curled up and dosed.

Easter moved to a new barn, little bantam chickens would roost on her back.
The pony was round and comfortable and never gave the chickens any flack.

These days she lies out in the sun to nap when she gets tired.
She’s 37-years-old and retired.

Beneath Easter’s barn live a few foxes with dark cinnamon fur and bushy tails.
Many days you can see the foxes running alongside the rails.