Last night, Wednesday, October 13, the Pixies played their first-ever headline show in Chile at the Teatro La Cupula in Santiago.

“We were so moved by this story,” said Pixies’ Black Francis, “by how many lives had been affected by this, and how the Chilean people banded together to support what can only be described as a miracle. We wanted to do something to show how affected we were by this, so we played a special set at tonight’s show, 33 songs for the 33 miners, the longest set we’ve ever played as a band. We found out five minutes before we went on stage that all of the miners had safely reached the surface. This was definitely one of the most meaningful show we’ve ever played.”

Black Francis introduction to the set:

The Pixies’ special 33 Songs for 33 Miners set (plus two encore songs) consisted of:

ENCORE:
Where Is My Mind
Gigantic 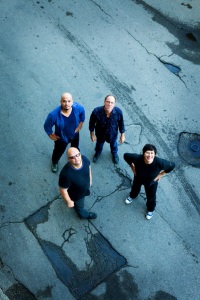 The last time I wrote a live review was when Dave Navarro’s band played the Paradise about four years ago, because my friend Karen has a huge crush on him [she probably still does. Karen and I are no longer friends because she gets mad at me very easily and never forgives me]. Needless to say, I mainly reviewed albums as a music critic and never picked up on the art of writing a solid, engaging live review [for a good one: see Sarah Rodman at The Boston Globe]. I did go to the show with a very cute, smart guy and he held my hand during the set! That was sweet. I’ve also never been a Pixies fan [How is that possible when I’m from Boston? I don’t particularly follow the Red Sox either but I adore The Patriots. Football is cooler.] I’m only familiar with the radio singles. I’ve seen the band once live before at Agannis Arena and it was a pretty good show. The yelling songs I can do without. There’s definitely a cult following. You know, the cool kids are in the crowd. Now they are the hipster parents who got babysitters to have a big night out at the rock show.

The Wang Center is a rather regal setting for a band like Pixies. It’s for ballet. At least it used to be but things have changed. So now the ornate building served as the homecoming venue for that band from UMass, not Dinosaur Jr., but Pixies. It’s just that the Pixies seem much less fancy and more rock and roll and gritty. The venue choice surprised me. It was a treat to see the Pixies there. The latest craze for older bands is to get back together and play a popular album in its entirety and for the Pixies that is Doolittle the band’s third album which includes classics such as “Debaser,” ‘Wave of Mutilation,” “Here Comes Your Man,” “Hey,” and “Gouge Away.”

Often I sensed that the crowd was way more into the show than the band and that’s never a good thing. I wanted the band to put in a hearty, complete effort to entertain me. [I completely enjoyed myself and got into it and all but I don’t know most of the songs]. After playing Doolittle in its entirety the band played three [egocentric I’d say] encores of B-sides. On “Where is My Mind,” my date thought that it sounded worse live than on the CD. He felt the Pixies gratuitously played the song. Judging by the hopping and shaking and cheering and cell phone picture-taking and tweeting and texting going on around us, the crowd disagreed.

Bassist Kim Deal looked most at ease and energetic the entire time and particularly on the final song (and the band’s third encore) — incidentally my favorite Pixies’s song “Gigantic.” Of course my classy date wrote that the encore sucks. “It was so short it was like my 20-year-old date cumming in his pants before I even took my shirt off [quote obviously written from my point of view].” Frank Black rarely smiled but his voice sounded great and on other numbers he loosened up. All in all, the Pixies turned out a cool, grooving show. The band falls easily back into playing off each other and riffing and jamming on several songs.

WEIRD AT MY SCHOOL