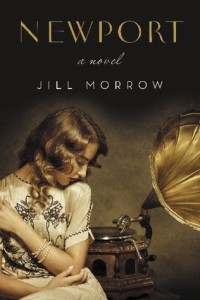 Newport hooked me from page one as a page-turner in which to immerse oneself during a weekend or holiday. There’s the beautiful sepia cover with a blonde young woman with ringlet waves in deep thought in front of phonograph which drew me in. I wanted much more of what I saw on the cover. Newport and the 1920s. Two subjects with sophistication, flair and romantic nostalgia.

Dashing and successful Boston attorney Adrian de la Noye travels to Newport with his young associate/protégé Jim Reid to revise a client’s will. Bennett Chapman plans to marry the much-younger and stunning Catharine Walsh and his children aren’t thrilled over the marriage or their father’s plans to include her in his will. It’s been twenty years since Adrian last visited Newport and his story along with that of the secretive Catharine Walsh and her daughter Amy unfolds. Utilizing séances where Amy serves as a medium for Chapman’s departed wife’s messages to him, her children and others in the room. She declares that Catharine Walsh and Bennett Chapman must marry. She also exposes secrets about everyone. Is it a scam perpetrated by the grifter mother-daughter team or is Mrs. Chapman truly speaking from beyond? Morrow traverses from present day to twenty years earlier and includes several [fairly predictable] twists.

“For as long as Jim had known Adrian de la Noye—and that was practically all of Jim’s twenty-five years—the man had never seemed ruffled or out of place. Such ease was to be expected in the sanctified halls of Andover and Harvard, which Jim had attended on Adrian’s dime. Adrian had been born to fit into places like that, and he called both institutions his alma mater.”

Author Jill Morrow unfortunately does not sufficiently establish setting or time. It could have been nearly any time and any place in the past. If the book wasn’t called Newport I wouldn’t be able to guess where we were. First it was off-season and besides the main seaside mansion that the characters visit and a walk two characters take along the beach, Morrow didn’t really describe what I’ve come to understand about the Newport historical days with the Four Hundred—a group of old money families—holding elaborate and exclusive parties. It unfolds that the Chapman family is new money and therefore not well-regarded by the Newport set. Adrian de la Noye summered on Cape Cod although he partied with his friends in Newport often. This is a character-driven novel where mysterious, broken characters propel the story-lines. Once the reader starts she wants to know exactly what happened and what will happen. For genuine 1920s allure one is better off reading F. Scott Fitzgerald’s This Side of Paradise or Erika Robuck’s Fallen Beauty or countless other novels set in the Jazz Age.

Visit Newport around the holidays to see the mansions decked out gorgeously in holiday decorations.

FTC Disclosure: I received this book for review from William Morrow.