Posted by Amy Steele in Visual/ Performance Art on April 3, 2010 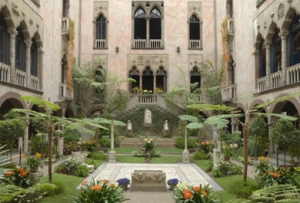 –nasturtiums (Tropaeolum majus) were one of Isabella Stewart Gardner’s favorite flowers.
–grown at her greenhouses at Green Hill, the Gardner family estate in Brookline & Beverly summer home.
–Isabella hung nasturtiums from the balconies of the courtyard for a public viewing the week before Easter.
–Her birthday is April 14.

from the Isabella Stewart Gardner website— FUN FACTS ABOUT NASTURTIUMS:

~ Nasturtiums are native to South America and were introduced to Europe by the conquistadors in the sixteenth century.

~ The word nasturtium comes from the Latin words nasus (nose) and tortus (twist), most likely a reference to the spicy scent and flavor of the leaves and blossoms.

~ The plant was given its scientific name, Tropaeolum majus–from the Latin word tropaeum or “trophy”–by Linnaeus because of the shield-like shape of its leaves.

~ Monet loved nasturtiums and planted them widely in his gardens at Giverny, including a place of honor in the border of the path to his front door.

~ In 1934, the Burpee Seed Company was about to introduce new colors of the Double Hybrid Nasturtium ‘Gleam’–the type of nasturtium that we grow today at the Gardner–when someone stole $25,000 worth of seeds from an experimental field.

~ During World War II, dried ground nasturtium seeds were used as a substitute for black pepper in Europe.