book review: How to Grow Up

“If your path into so-called adulthood has been more meandering and counterintuitive than fast-tracked, then this is the book for all of you, my darlings.”

“Those ten years living below poverty level would likely be unacceptable to someone reared in a wealthier environment, but I always expected I’d be poor. I hadn’t expected to be able to build a life around being creative, and I really hadn’t expected to ever make a living at it.”

The Chelsea, Massachusetts native writes about her prolonged move into what many deem adulthood—the societal check-list sort—buying a home, having a successful career, not living paycheck to paycheck and being in a stable adult marriage that maybe includes marriage and a family. As a fellow GenXer I understand the protracted route. Not knowing exactly what you want to do or where you want to be. Not knowing how to become who you want or how to be who you are and make money. All real worries. Plus roadblocks both mental and actual. In her youth, Tea worked lots of odd jobs. Some places fired her and some she quit. She learned from it: “I realized that having a job to fund your life’s purpose was every bit as important as being ready to quit your job when it got in the way of your life’s purpose.”

How to Grow Up is a series of essays that connects Tea from her childhood in working-class Chelsea to her happy marriage in San Francisco. She discusses meditation, Buddhism, healthy eating, feminism, writing, working out, being a creative type and finding love. Tea writes: “At forty-three years old, I think I’ve finally arrived, but my path has been via many dark alleys and bumpy back roads.”

In “You Deserve This” she writes of her awful apartment experiences–places chosen for locations and cheap rent. Most of us urban dwellers have had relatable experiences. I’ve moved annually. I could probably write a book about it. She writes: “It was as if each new apartment would elicit from us the harmony we lacked, each new house key a metaphorical key, too, the elusive key to making this thing work.” Also this wise statement: “By the end, I knew one thing for sure. Whatever relationship you are in right now, that is the relationship you’re in. You’re not in the future awesome relationship that may never happen. You’re not in the possibility of it, you’re in the reality of it.” So live in the moment. Get out if it’s bad. Seek therapy if you can.

Redefining feminism I understand. I had a millennial tell me that she felt guilty getting a pedicure and felt it was an anti-feminist thing. Tea explores Botox, anti-aging creams and other beauty products in “I’m So Vain.” She states: “When feminism felt like it was bumming out my reality, it was time to redefine what a feminist was.” At the base level feminism means equal rights for women in all aspects of society. Of course after Patricia Arquette’s wonderful speech about pay inequity at this year’s Academy Awards, she’s been called out for not being inclusive enough, overlooking that fact that she brought up the subject at all. It’s become that this white woman cannot speak for all of us. I would like women to just support other women.

Her relationship with veganism, being a Buddhist and eating healthy carries complicated explanations. In “My $1,100 Birthday Apartment” she said: “There was not a moment of hesitation about which purse I desire. It consisted of the slashed, long-haired pelt of some poor animal I hoped had died a natural death, not that I thought too much about it.” So she knows that likely that animal did not die a peaceful death for your designer bag. That dichotomy. Eating animals does hurt the animals and the environment and one’s health. All things that at various times, Tea says she cares about. She writes in “WWYMD: What Would Young Michelle Do?”: “I still wonder about my ability to love and emphasize with animals and yet eat them. It seems a disconnect must be in place, a kind of denial, but the more I probe, the more I believe it’s not denial but acceptance. I am a feeling, loving human who lives off the meat of other feeling, loving animals.” And then: “But somewhere along my stumble to adulthood I began to realize that, while it was important, food tasting good was only part of it. It should also be good for you, and maybe even be produced in a way that doesn’t harm working people or the planet itself.”

She starts to loosely practice Buddhism like most Americans who practice Buddhism. Buddhists are vegan. Not many Americans have the willpower to be vegan. One of the tenements is not to kill anything. She finds that meditation helps her greatly: “So Buddhism didn’t get me high, and it didn’t make me stop hating my ex. What it did do is show me exactly where the problem was located: in my mind. Which was great, because my mind, unlike my ex, was something I had some control over.”

Tea chooses not to be involved with anyone with depression and that’s her prerogative. Many people want to stay away from the crazy of mental illness. It takes a truly compassionate person to date someone with mental illness. Of course no one can prevent being mentally ill. Tea says in “Beware of Sex and Other Rules for Love:” “One standard that took me a while to wake up to was, no depression people. It was tricky in many ways, the deepest being that depressed people were my type, and for a long time, I didn’t even know it. Depression is like a haze, a cloud or an aura that surrounds certain people.” She meets a woman who complements her personality and loves her as is. They marry. Of Dashiell she writes: “As someone who likes to say yes to lots of things, especially odd clothes and home décor sourced from dusty thrift shops, I have been blessed to be with someone like Dashiell, whose dial is set to no.”

Although slow to start in which I had my doubts I ultimately truly liked my first Michelle Tea experience. I will seek out another of her memoirs. Some essays are more interesting and stronger than others but ultimately How to Grow Up is worth reading.

–review by Amy Steele
FTC Disclosure: I received this book for review from Plume.

purchase the book: How to Grow Up: A Memoir

essays, how to grow up, memoir, Michelle Tea 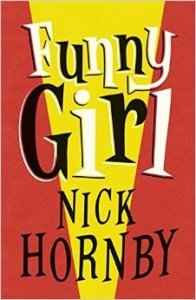 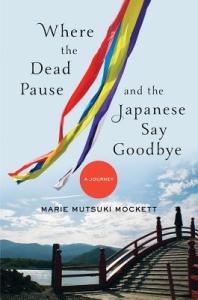 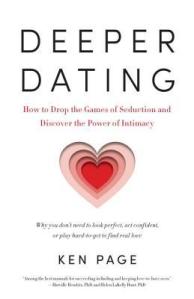 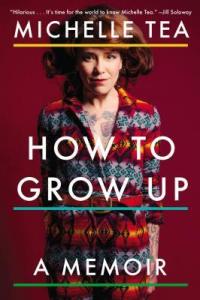 Michelle Tea
How to Grow Up
Brookline Booksmith
Thursday, February 12 at 7pm 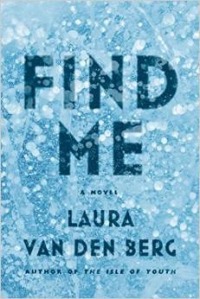 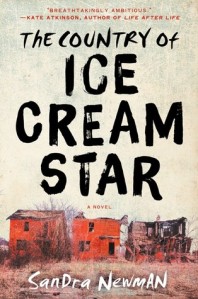 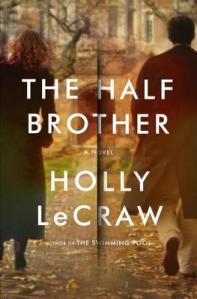