Well-written novels about mental illness are few and far between. There’s Prozac Nation by Elizabeth Wurtzel and the classic The Bell Jar by Sylvia Plath. Many write memoirs. My favorite is Darkness Visible by William Styron. I met author Amy Koppelman through Twitter, an excellent source for connecting with authors. She sent me her novel Hesitation Wounds. I figured I’d be a strong match because I have depression and anxiety.

In Hesitation Wounds, a psychiatrist specializes in treatment-resistant depression. Sometimes meds just don’t work. When you’ve tried seemingly every medication and treatment plan with zero symptomatic relief, what can you do? You face despair and uncertainty. Dr. Susanna Seliger becomes the last resort for many troubled people. Of her practice: “When the MAOIs, TCAs, TeCAs, SNRIs, and SSRIs fail to get results, the patients are sent to me. And I zap ‘em. Or that’s what the movies would have you think. Electroconvulsive therapy (ECT), or, as it’s better known, shock treatment, is only shocking in that it doesn’t actually cause much, if any, physical pain. A patient’s emotional pain is an entirely different story.”

She makes every effort to avoid emotional attachment or involvement in how her patients feel but instead treats their symptoms. She maintains a professional detachment. She’s not there to talk and empathize. Dr. Seliger’s brother died and she feels quite a bit of guilt that she couldn’t save him. Koppelman elaborates: “You eternally seventeen. I try to figure out still. What I missed. Words I let pass, smells I didn’t recognize, unfamiliar tastes and sounds. Each an opportunity I failed to seize. Each a possibility to save you. Although now, so many years, so many patients later, I am aware that treatment is not without consequence, death without promise, visions without meaning. And handholding is merely that.” She now tries to save others from suicide. When a patient she allowed to break the emotional barrier [maybe he reminded her of her brother] commits suicide it throws Dr. Seliger into a spiral where she contemplates the relationship with her mentally ill brother and any warning signs she missed. Could she have stopped him?

“You can’t possibly know this because depression is an insidious disease. Robbing you of forethought, it makes you a reactive participant. Witnessing the world through the distorted prism of carnival glass leaves you feeling betrayed. The cruel nature of beauty. The unremitting groan of loss. You close your eyes and see him, cover your ears and hear. But that doesn’t excuse your actions. You should have said goodbye, Dan. Or at the very least let me know you had to go.”

Mental illness and its aftermath aren’t blatantly glamorized on these pages. The words remain open to interpretation. Dr. Seliger questions her profession and her past by allowing thoughts and feelings to gush upon the pages. Grief engulfs herself and leaves her in a quagmire of uncertainty and despair. And as readers we can feel it though we’re helpless just as Dr. Seliger remains somewhat helpless. She must come to terms with it in her own time and through her own distinct process. That’s the beauty of Koppelman’s rather poetic, journal-style writing. At times passages read as an open letter to Seliger’s dead brother. In order to understand herself she must splinter both her heart and her orderly thought process. Dr. Seliger must no longer resist what’s been holding her back from living freely with a level of contentment. That’s the trickiness with mental illness. It’s an up and down process for those who suffer with it and those who love those who live with it daily. This short novel packs a strong punch with lovely turns of phrase. Just like mental illness clear-cut solutions and fairytale endings do not exist. Managing the moment does. The mind remains a malleable work-in-progress. Koppelman writes with heartbreaking authority on the topic. It’s quietly effective, nuanced and moving.

Sarah Silverman earned a SAG nomination for her portrayal in the film adaptation for Koppelman’s second novel I Smile Back released this fall. I highly recommend the film. Silverman brilliantly depicts a woman struggling with her mental illness while raising her two children. One minute she’s packing school lunches, the next she’s snorting cocaine or crying on the floor. Honest and intense, it’s a must-see

Both these psychological thrillers drew me in and kept me reading to find out what would happen to the women involved. 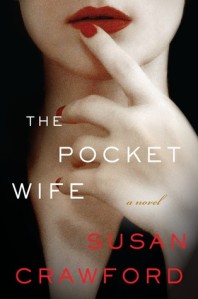 A woman’s mental illness grows increasingly worse as she suspects her husband cheated on her and that she may have killed her neighborhood friend Celia and erased it from her memory. Dana Catrell married a safe, quiet man—Peter– whom she thought would balance her and enable her bipolar disorder to remain mostly dormant. “For a while she took the medicine that made the world around her such a faded, unbright place to be, let it hold her in its sagging, dimpled arms until with a sigh she shuffled into the rest of her life, eventually trading the drug for a tall blue-eyed husband and a world more numbing than lithium could ever be.”

When Celia winds up dead, the day after the two women argued, Dana spirals out of control and her thoughts race. She’s not sure whether to implicate herself or her husband in the suspicious death. Crawford writes commendably about mental illness. It’s realistic. “This time Dana feels anger surging through her—anger for the lost, baffled way she’s lived her life, for the father who deserted her, for her enigmatic, cheating husband; for the cruel, disabling illness wrestling with her mind.” A great psychological thriller to read over a weekend.

FTC Disclosure: I received this book for review from William Morrow.

A baby is found in the woods near a prestigious university campus. Whose baby is it? How did it die? Who abandoned it? Using multiple female perspectives author Kimberly McCreight weaves a page-turning psychological thriller as complex as her first novel Reconstructing Amelia. Molly a freelance journalist who recently lost her own child gets assigned the story. “Despite my initial vertigo, I was no longer conflicted about staying on the story. I wanted to, needed to write about it, and with an intensity that even I had to acknowledge was somewhat disconcerting.” Sandy struggles to survive—she’s attempting to pass her GED– as her wayward mom spends nights out and skirts bill collectors. Then there’s rigid and regulated Barbara, married to the Chief of Police and concerned for her youngest child’s outbursts in school. McCreight creates complicated characters, develops each character and utilizes their innate differences to effectively advance the story. Many twists will keep readers captivated to the end. 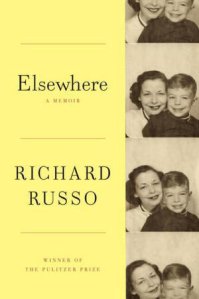 Richard Russo doesn’t write particularly empathetic female characters. Writers write what they know and any psychiatrist might extrapolate the relationship with his mother from his novels. In Elsewhere, Russo describes a mother so dependent on her son that she follows him constantly, across the country from New York to Arizona and back to Maine. She suffers various afflictions and anxieties though never seeks any medicinal or therapeutic help. Russo’s a fantastic writer but there’s an arrogance to this. He writes, “From the time I was a boy I understood that my mother’s health, her well-being, was in my hands.” Just how much does he resent his mother?

“My mother’s ‘condition.’ This was something the whole family seemed aware of, but no one talked about it. One word, nerves, was evidently deemed sufficient to describe, categorize, stigmatize, and dismiss it.”

Russo left the factory town of Gloverstown, New York in 1967. He writes of it often—Empire Falls, Nobody’s Fool, The Whore’s Child—but he’s never been back. When Russo enters the University of Arizona, his mother tells him she’s left her well-paying job and will move to Arizona as well. She needs a fresh start too, after all. This continues. He finds apartment after apartment for his mother wherever he’s living. While exhibiting a snobby outward appearance she’s becoming increasingly shaky and unsure of herself. She claims independence and feigns disdain when Russo offers assistance.

She can’t understand why her son, an accomplished scholar, a PhD, continues to write about their mired hometown. She’s never satisfied. Russo says one kind thing about his mother and that’s her accumulation of books and her establishment of some sort of library—“If a stranger came into her apartment, a quick scan of her books would give him a pretty good idea of who she was, whereas all he could say about ours was, Boy, these people sure have a lot of books.” When his daughter gets diagnosed with Obsessive Compulsive Disorder [OCD], Russo ponders his mother through a diagnostic lens. Mental illness can skip a generation. Elsewhere is quite stark yet enthralling, honest. This memoir now becomes part of my library.

CELEBS: Catherine Zeta-Jones and others can reduce stigma of mental illness

On Monday, Catherine Zeta-Jones’s publicist announced that she’d been hospitalized for treatment of bi-polar disorder. She has bi-polar II disorder which means she has more periods of depression than mania. She’s had a stressful year and external situations take a toll on anyone and particularly those who already have a mental illness. The best part of this is that Catherine Zeta-Jones can provide a high profile example that mental illness is a disease like alcoholism that needs constant monitoring and treatment but shouldn’t mean that people feel the need to keep the person at a distance.

according to the CDC, 1 in 10 Americans reports depression at some time during their lives.

Although Tom Cruise disastrously stole away her true message, Brooke Shields wrote a wonderful book about her post-partum depression called Down Came the Rain. 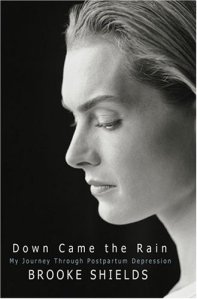 Ashley Judd has a new memoir, All That is Bitter and Sweet, where she discusses her battles with depression.

Judd also stars in the film Helen [available via netflix instant] where she plays a woman who hides her depression and has a major breakdown. It’s an excellent performance and quite a good film. I have depression and I thought the depiction very accurate. Although depression manifests itself differently in everyone.

The rich and famous aren’t immune.