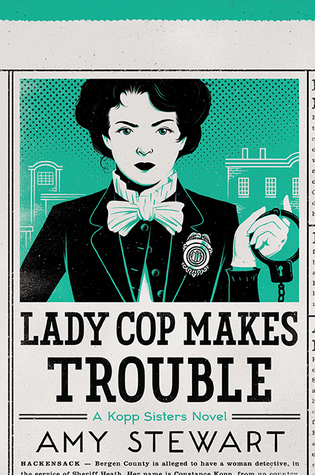 This was an overall fun and enjoyable read. I didn’t read the debut Kopp Sisters novel Girl Waits with Gun so maybe it wasn’t a good idea to read the second book. I do think that even in a series each book should be a stand-alone that anyone can pick up to read and figure out what’s going on. Despite not knowing the case from the first novel which did carry over to this novel–at least in consequences for Constance Kopp and her position as deputy sheriff—I could mostly piece together what I needed. The youngest sister Fleurette confused me at first and I didn’t know if she was a daughter or niece. I absolutely admire and appreciate that Amy Stewart found clips in which to base this case and that Constance Kopp was a real person. Stewart explained, “I’m lucky enough to have a huge treasure trove of newspaper clippings covering 1914 and 1915. Constance was in the paper all the time. This book covers one particular incident that made headlines nationwide: the pursuit of a convicted criminal.” This is a delightful description of Constance’s duties for the New Jersey sheriff’s department: “I wasn’t just a chaperone for wayward girls. I carried a gun and handcuffs. I could make an arrest, just like any deputy. I earned a man’s salary. People did find it shocking and I didn’t mind that one bit.” Constance stands as a strong, determined female working in the male-dominated field of law enforcement. She doesn’t seem deterred when men don’t know how to speak with her or how to react to her as she carries out her varied responsibilities. She lives with her sisters, Fleurette and Norma, in the countryside in New Jersey. Norma seems content to raise homing pigeons and not venture far from home. Fleurette dreams of the stage and for now acts in a local production. The sisters look out for one another and serve as sounding boards for each other. Not having sisters it seems a wonderful thing. This case didn’t quite enthrall me enough for a mystery/thriller, fortunately the strong female lead makes up for my lack of interest and sometimes confusion in the case. I rooted for Constance and her sisters to fight the system and to fight sexism.