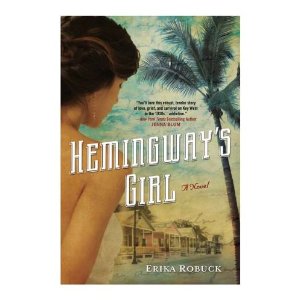 In college, author Erika Robuck developed an interest in Ernest Hemingway’s writing. Years later during a visit to his Key West, Florida home she noticed an unforgettable picture of Hemingway on a dock in Havana surrounded by a crowd of onlookers including a Cuban woman with a piercing gaze. She knew she needed to include this woman in a novel about Hemingway.

Hemingway’s Girl features sparkling prose and intriguing history. Set in scenic Key West, Florida during Ernest Hemingway’s shaky second marriage, Robuck depicts stretches of days with fishing and drinking and verbal sparring through the eyes of a young half-Cuban, half-American housekeeper named Mariella. She and Papa Hemingway develop a flirtatious friendship. Soon Mariella’s torn between the affections of the famous writer and a WWI veteran and boxer, Gavin, building the Overseas Highway.

Robuck provides a lush scenic backdrop as well as heartbreaking historical detail. Gavin’s friend John lost limbs in the war and struggles to fit into society and make a life for himself as an artist. Then there’s the WWI veterans building the Overseas Highway nearly forgotten when one of the major disasters in history, the 1935 Labor Day Hurricane, strikes. While Mariella and her family struggle during the Depression-era, Hemingway and his wife Pauline seem to be living in the same rather decadent, selfish manner as always—her latest project is to replace all the fans in the Key West home with chandeliers.

Through this glimpse into Hemingway’s tumultuous personal life, we can imagine the effect he had on others around him. Mariella establishes a lifelong bond with the older man. Robuck’s passion for the subject bursts through the pages. Providing depth and a profound slice of American history while avoiding a sappy throwaway romance, Hemingway’s Girl is a remarkable and lovely novel.

FTC Disclosure: I received this for review from the publisher.