This is my favorite album of the year so far. Intriguing lyrics, intricate harmonies, unusual yet mesmerizing vocals and three strong women composing songs with electronic edginess. What could be better than that? The songs remain somewhat upbeat even if the subject matter isn’t always. The unusual, crisp compositions highlight Lovers many years’ experience as songwriters and producers. Very extraordinary musical talents combined into one band: a brilliant concept. Very danceable. Sometimes moody. Sometimes contemplative. Always self-assured and delightful.

I envy this band, adore this band and want to be an honorary member even though I don’t play any instruments or sing. They’re so cool. They’re happy in the way that you want to dance around expressing your love for your surroundings and all the people in our pathways. Portland, Ore. undoubtedly a hotspot for musical experimentation and expression. These three women sing about sexuality, female friendships and evolution in the face of the ever-changing world.

In 2002, producer/ percussionist Emily Kingan, then on tour with classic Portland feminist hardcore band The Haggard, invited lyricist Carolyn Berk to join the bill. Ferris was their roadie. Years later the trio met up in South America where Berk was traveling and
producer/performance artist Kerby Ferris was living at the time, performing in various electronic projects in Sao Paulo.

Berk said: “There’s something very cosmically powerful about choosing love over and over and over again, recommitting to people, cooperating on creative endeavors. We wanted to make an album that reflected our commitments to supporting each other’s creative processes. There is something so pure and magical about true friendship love, and we wanted to put that into this album.” 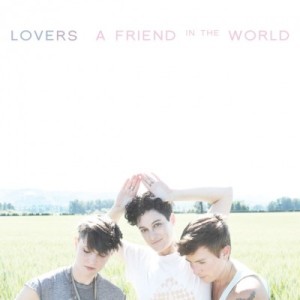 purchase new album at Amazon: Friend in the World