“For eight months after his father’s death, this was the sum of Pasquale Tursi’s life. And if he wasn’t entirely happy, he wasn’t entirely unhappy either. Rather, he found himself inhabiting the vast, empty plateau where most people live, between boredom and contentment.”

Mediocrity. That rut in which most people exist in oblivion. Going to work. Going home. Working out. Eating dinner. Watching television. Going out to dinner and to the occasional film, play or concert. Existing. Then there are those people who want a bit more than an average life. Beautiful Ruins focuses on those people. Every character in this novel wants to be in a better position than she or he is in at the present but seems stuck in some way.

Despite the gorgeous cliff side landscape on the cover, Beautiful Ruins focuses more on character and less on landscape. Before reading this I’d just finished Portrait in Sepia by Isabel Allende and if you want landscape that’s a formidable read. Author Jess Walter features Old World Charm tangling with New World wonderment as an American actress, Dee Moray, in the 1960s stays at a small hotel on a small island run by the young Pasquale Tursi. Suddenly Pasquale’s quiet world turns topsy-turvy because Dee Moray works on the famed production Cleopatra with Liz Taylor and Richard Burton and she holds a big secret. Something to do with the stomach ailment that brought her to the island and Richard Burton . . . so cinematic.

Not to take away from the beauty that is Italy–one-third into the novel– Walter describes the war ruins found on the cliffs—the crumbled rocks and boulders and war bunker amidst lovely cliffs and trees with the vast blue ocean below and beyond. Both Pasquale and Dee seek solace in the ruins. In the ruins one expects major events to happen when sometimes only ordinary or minor events occur in the middle of a major historic event—in this case WWII. The inside of the bunker has been painted with drawings of two soldiers and a woman. Something that many may never see. Who are these soldiers and who is the woman Dee ponders?

Much becomes lost in translation between the pair and that’s part of the fantastical, magical story. I liked how Walter interspersed Italian words into sentences without any interpretation or need for elucidation. The words just made sense. You understood them in their placement. These little touches really enriched the reading experience. Pasquale and Dee suffer language barriers but sometimes you don’t need to say anything to have a connection with someone, whereas with many people you speak the same language but never develop a strong connection. This bond lasts 50 years as Pasquale travels to Hollywood to find Dee.

Walter deftly travels between past and present to tell Dee and Pasquale’s story. In present day there’s a cerebral, eager production assistant Claire Silver, her boss the well-known Hollywood producer Michael Deane [who worked on the Italian production of Cleopatra]—once a legendary figure now resorting to producing awful reality programs. An Italian speaking young man named Shane happens to run into Pasquale on the lot and becomes the interpreter. There’s nothing overly sentimental about it. Instead it’s a sweet reminder of love and friendship. Beautiful Ruins satirizes tourism, war, Americans, Italians, Hollywood and the film industry. It’s a truly creative and unique read that I immensely enjoyed and didn’t want to put down. 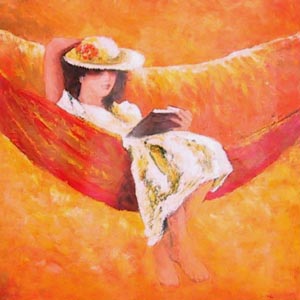