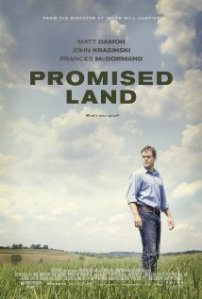 Description: When he’s dispatched to a small town similar to one he grew up in, a salesman [Matt Damon] for a natural gas company grows conflicted.

“You offered us money. All we had to do to get it was be willing to scorch the earth beneath our feet.”

This quiet film shows both sides of the natural gas issue through the eyes of a small farming community that’s struggling with a failing economy. As a natural gas company swoops in to buy up land, various people consider their future options. Will money from the company improve their lives or will the natural gas development exploit them and destroy their values? Wish it covered fracking in a bit more detail. Wonderful, thoughtful script by Matt Damon and John Krasinski and superb acting by Damon, Krasinski, Frances MacDormand, Rosemarie Dewitt and Hal Holbrook.

Promised Land is provocative and even confusing with a great twist. I got a bit teary at the end. Matt Damon’s character gives this speech to a farmer about how he grew up in the Midwest and couldn’t wait to get out of there and how the guy is most likely subsidized by the government and he didn’t understand why he’d keep on doing something that was so unforgiving and so outdated. To me that’s honest and makes complete sense. As much as people don’t want to give up the way things are, sometimes change needs to happen. We could re-allocate our resources in different ways. We need to embrace progress and change and move into the future without harming each other, our environment and animal.

for brilliant songs– for amazing concerts– for being so classy

“I Believe” is my favorite song and I played it repeatedly as I did many REM songs. Still have my “GREEN” t-shirt from concert I went to in college. REM’s music meant a lot to me over the past few decades and I still appreciate it so much.

Life’s Rich Pageant
song picks: “I Believe,” “Fall on Me,” “Begin the Begin” 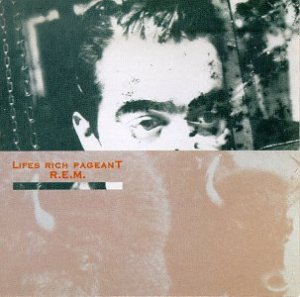 Green
song picks: “You are the Everything,” “Orange Crush,” “Get Up” 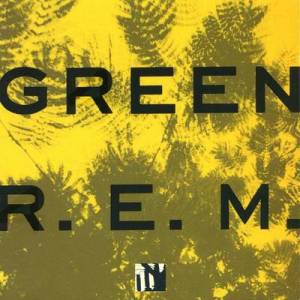 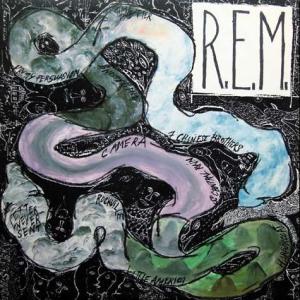 Fables of the Reconstruction
song picks: “Maps and Legends,” “Life and How to Live It,” “Cant Get There from Here”