Posted by Amy Steele in Uncategorized on November 15, 2016 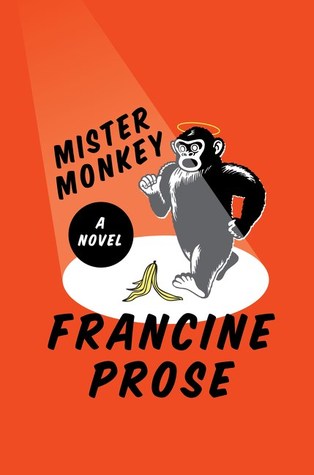 “They are in this together, everyone is happy to be here and disappointed to be here, glad to have a part in a play, glad to work for scale, but truthfully not all that overjoyed to be working in an off-off-off-off-Broadway production of Mister Monkey, the umpteen-hundreth revival of the cheesy but mysteriously durable musical based on the classic children’s novel.”

In writing this novel about a failing theatrical production, author Francine Prose [Lovers at the Chameleon Club: Paris, 1932, My New American Life, Blue Angel] addresses the rippling effect of the play on a bevy of players. The faltering stage production of a classic and popular children’s novel brings together a disparate group of actors, crew and audience members.  Prose imagines how this rather basic play correlates to the mid-aged actress questioning her career, the child actor playing the titular monkey, the children’s book author and young child in the audience, that child’s teacher and others. Each chapter builds on the past one. The play’s based on a novel about a wealthy New York family who adopts an orphaned monkey. The father’s girlfriend thinks the beloved monkey stole her wallet. The case ends up in court. Absurdity ensues.

Each chapter addresses the play from a different character’s viewpoint adding more layers to the story behind the play. Margot wonders how she ended up working so hard and not advancing her career in the way she’d imagined. She’s playing Mister Monkey’s lawyer in a tiny theater. This isn’t the career she’d envisioned for herself at Yale. She reminds herself: “Art is art, theater is magic, no matter how humble the venue. Together they have transformed a house full of strangers into a group of people all rooting for Mister Monkey!” The home-schooled twelve-year-old actor in the monkey suit became engulfed in everything simian when he landed the role. He also harbors a massive crush on Margot. Costume designer Lakshmi believes “Mister Monkey is a nasty piece of imperialist propaganda justifying human trafficking, which you would know if you were smart enough to substitute a person for a monkey.” Eleanor works as a nurse full-time and acts on the side. The grandfather and his grandson, Edward, attended a matinee of the play. Prior to the play the grandfather started reading the book to his grandson. “The grandfather didn’t like the book either. It seemed obvious and preachy, full of improving lessons about race and class, honesty, justice, and some kind of . . . spirituality, for want of a better word.” Edward takes the playbill to school and a spirited argument about evolution erupts among the kindergartners.

How does this affect Edward’s teacher Sonya? She’s in trouble because her young pupils discussed Darwinism.  Sonya meets a guy for dinner at a fancy restaurant where she ends up next to the book’s author. The date deteriorates quickly. Suffering from PTSD after Vietnam, Ray ending up writing Mister Monkey based on an experience during the war. He’s now wealthy. Whenever Ray receives theatrical royalties he takes whomever he’s dating or married to at the time to dinner at a restaurant called Enzo’s and he gives his favorite waiter Mario tickets to the production. Mario’s fiancée left him—“She was the one who pretended to be someone else, someone who wanted a life of simple contentment with Mario. By then Mario had moved back to his parent’s house for what he’d thought would be a few weeks.” Mario adores the theater and will attend any play and restaurant patrons gift him tickets often.

Prose based the novel on her own experience attending a children’s musical with her granddaughter at a small theater in Manhattan. Prose found the production lacking and tragic and at one quiet moment her granddaughter exclaimed: “Grandma, are you interested in this?” And so Prose wrote this novel to address that question. Fascinating connections allow Prose to explore shattered dreams, unfulfilled goals, success, failure, raising a child in Manhattan, career, love and friendship through wonderful characterizations, vivid prose and a sharp tone. It’s easy to become engulfed in this brilliant, darkly amusing and astutely observational novel.

Lovers at the Chameleon Club, Paris 1932 centers on a cabaret club, The Chameleon Club, in Paris from the late twenties through World War II. It’s a place where the disenfranchised, the strange, the neglected and the outcasts seek refuge within its safe walls at least for a while. In Yvonne’s club, cross-dressers and homosexuals can gather and be free to love and be loved and perform and dance and enjoy themselves. To be themselves without questions, without fear of judgment or penalty.

Author Francine Prose based this complex tapestry on well-known Brassi photograph “Lesbian Couple at Le Monocle, 1932.” She discovered that the woman wearing a tuxedo in the photograph, Violette Morris, was an Olympic hopeful and professional auto racer before the French government revoked her license for cross-dressing in public. Hitler invited her to the Berlin Olympics as his special guest and she became a Nazi sympathizer and spy. Prose based Lou Villars on Morris. She uses various voices and tenses to tell the stories of Villars and others associated with the Chameleon Club including a Hungarian photographer, an actress turned Baroness who bankrolls his career, an American writer and a young woman writing Villars’s biography in present day.

“As a feminist historian, I should devote more attention to the role that breasts played in Lou’s psyche, to her gender dysphoria, her sexual confusion, her lifelong discomfort with the restrictive female role. But the subject becomes much simpler when I try to think as Lou did: her breasts would make her suffer and, in her worst fantasies, kill her.”

Despite the dreamy Paris locale, the characters encounter various challenges in their personal and professional lives. Forbidden passions, impending war, questionable patriotism and sense of self. It’s carefully crafted and strikingly written. I adore the concept. Amazing, yet not, having read several of her novels, how Prose can so fluidly transition from one character’s voice to another’s and maintain the reader’s interest. Unfortunately it’s a bit too drawn out at parts and I grew interested in some characters more than others so it lagged a bit.

purchase at Amazon: Lovers at the Chameleon Club, Paris 1932: A Novel

I’ve read about 100 books this year. These 20 made particularly lasting impressions.

4. A Stranger on the Planet by Adam Schwartz [Soho Press]

5. The Astral by Kate Christensen [Doubleday]

7. The Submission by Amy Waldman [F,S&G]

9. The Rape of the Muse by Michael Stein [The Permanent Press]

10. The Lies Have It by Jill Edmondson [Iguana]

15. The Grief of Others by Leah Hager Cohen [Riverhead]

16. The Ringer by Jenny Shank [The Permanent Press]

Lula was twenty-six. Old, she thought on dark days. Only twenty-six, on bright ones. She had time, but she had more time if she stayed in this country. She wanted to learn that American trick, staying young till forty. She Some American girls even got better looking. Not like Eastern Europeans, who started off ahead but fell of a cliff and scrambled back up a grandma.

Somehow I’ve never read anything by prolific author Francine Prose. She’s written 18 novels and I’ve been told her book Reading like a Writer offers fantastic advice. Lula, an Albanian immigrant, works as a pseudo-nanny watching a high-school age boy while his father works on Wall Street. Using crisp dialogue, vivid descriptions and biting humor, Prose chronicles Lulu’s struggles with capitalizing on the American dream while simultaneously attempting to keep some Albanian thugs from ruining everything.

Lula is a scrappy, astute character. While her job is cushy, she’s smart and realizes it will end soon and she’s calculating a way to gain citizenship and remain in the United States. Lulu writes stories that both her boss and attorney both find charming—old world tales of Soviet Bloc Albania and its backward ways. Lulu’s a magnificent liar and whether that gets her into trouble or not remains a major theme throughout the novel. My New American Life cleverly satirizes immigration and the American dream.

purchase at Amazon: My New American Life: A Novel