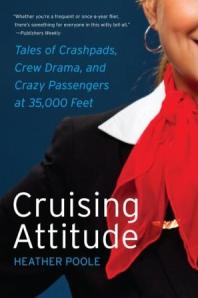 This memoir originates from a blog. This happened much more in the last decade than in this decade. Actually, Heather Poole signed her book deal in 2008. That’s not to say that it’s a bad thing to turn a blog into a book. What writer doesn’t want someone to notice the writing they do and pay them to write a book? I didn’t read Julie and Julia but the blog gained immense popularity and the film with Amy Adams and Meryl Streep proved enjoyable. Cruising Altitude reads in a way that each chapter stands alone with separate subject matter. I read the book in order but it’s not necessary to do so. One can select a section based on interest. Flying isn’t my thing even though I want to travel. I suffer from anxiety. The last time I flew I discussed flying with the pilots in the cockpit while sipping a ginger ale. Nevertheless I thought this might be interesting.

Poole became a flight attendant after college. She wanted to fly and appreciated the varied hours. In Cruising Altitude, Poole delves into various situations in the air, types of passengers and the flight attendant training and lifestyle. Would it surprise you to know that the wages aren’t a living wage? Flight attendants get some decent benefits such as free flights but get paid by the hour and only when actually in flight. Three-hour wait on the tarmac? Unpaid. Next flight, be nice and don’t ring for the flight attendant unless it’s urgent!

“Flight attendant schedules average eighty hours per month—and by that I mean strictly flying hours. Time on the ground does not count toward a flight attendant’s pay. And the clock doesn’t officially start ticking until the aircraft door is shut and the airplane backs away from the gate; the flight attendant saying hello to you while you’re boarding is not getting paid yet.”
[This makes little sense to me because I think it’s all part of what one expects from flight attendants, airlines and a flight]

“One reason I became a flight attendant was to take advantage of the flexible schedule, preferably the night flying. I just don’t do mornings well. I’d take a red-eye flight any day over a departure leaving at the crack of dawn.”

“Over the years I’ve caught red-handed a few other passengers who were trying to join the prestigious club, but membership has been waning over the last ten years. Maybe this is because people are so stressed out by traveling today that doing it at 35, 000 feet is the last thing on their minds. Or maybe passengers, like flight attendants, have gotten bigger or have become overly germaphobic.”

“What most nervous fliers don’t realize is, turbulence is normal and it can occur even when the sky appears clear. If you are a nervous flier, don’t be embarrassed to let the crew know during boarding. Flight attendants are trained professionals. If we know you’re scared we’ll go out of our way to be reassuring if the airplane does encounter a few bumps. I’ve gone as far as to sit in an empty seat beside someone and hold their hand.”
[I know that about turbulence. I actually don’t mind it– feels as if I’m on the ground in the air. And as I mentioned I’ve done the cockpit visit thing.]