book review: Me, My Hair, and I

I’m somewhat amused by hashtags such as #bighairdontcare #messyhairdontcare because women care a lot about hair. One #badhairday can set the tone for one excruciating day because when our hair doesn’t look good we feel less confident. Hair is generally one of the first things someone notices. Women spend a lot of time on coloring and weaving and treating and styling. In August I colored my hair bright red. I got many compliments from a surly teen on the streets of Boston to a gray haired man in the office building where I see my therapist. Now it’s a bit less bright as I used a color lift on it but it’s a kaleidoscope of reds and blondes. I think it’s cool for now but will go back to the deep burgundy I generally color my hair. I’m a natural blonde. I had blonde hair all through grad school. It’s not me. It does not suit me. My hair is also naturally wavy which I fought throughout high school and college. Now I embrace my semi-wild rocker hair. Although EVERY time I get my hair cut, the stylist wants to blow dry my hair straight which just doesn’t work and doesn’t suit my personality. I think my hair is one of my best features. My minimalist style approach works for me which doesn’t mean I don’t want my hair to look good. I just don’t want perfect hair.

In the introduction, editor Elizabeth Benedict writes: “While it’s easy to make light of our obsession with our hair, very few of the writers in these pages do that. We get that hair is serious. It’s our glory, our nemesis, our history, our sexuality, our religion, our vanity, our joy, and our mortality. It’s true that there are many things in life that matter more than hair, but few that matter in quite these complicated, energizing, and interconnected ways. As near as I can tell, that’s the long and short of it.”

Benedict asked 27 women to contribute to this anthology. Writers include: Anne Lamott; Adriana Trigiani; Myra Goldberg; Jane Smiley; Hallie Ephron; Suleika Jaouad; Patricia Volk; Siri Hustvedt and more. There’s a mix of races and cultures represented. There isn’t a wide age range or economical range represented. Most of these writers are in their 50s and 60s and well off that they can afford to spend much money on their hair.

Suleika Jaouad writes about losing her hair to chemotherapy treatments in “Hair, Interrupted:” “My disease has taught me that I can far more effectively take control of my look by embracing it and having fun with it, rather than forcibly trying to make something it is not.” In “My Black Hair,” Marita Golden writes: “I feel narrow minded and judgmental when all I really want is a world where Black women are healthy and have healthy hair that does not put them in the poorhouse, cause health problems, or reinforce the idea that they have to look White to be valued. And this does not mean that I want a world of Black women who have hair that only looks like mine.” Anne Lamott writes a wonderful essay that describes the moment she decides to get dreadlocks. Of her look she writes: “Dreadlocks make people wonder if you’re trying to be rebellious. It’s not as garbling and stapled as a tongue stud, say or as snaky as tattoos, but dreadlocks make you look a little like Medusa, because they writhe and appear to have a life of their own, and that’s scary.” Then she writes: “Dreadlocks would be a way of saying I was no longer going to play with the rules of mainstream white beauty.” Patricia Volk shares the list of expensive products she uses in “Frizzball” including a Moroccan oil intense curl cream ($45) and Coppola color care shampoo ($15). She writes: “I am one miniscule reason why the hair care industry, according to Goldman Sachs, is worth $38 billion a year in products alone.”

In quite an amusing essay “And Be Sure to Tell Your Mother,” Alex Kuczynski gets a full wax to her vaginal area in Turkey. “I arrived back at the hotel, and my boyfriend remarked that I looked like an enormous eight-year-old,” she writes. Good boyfriend. Many guys seem to like “no hair down there.” She notes: “I would learn that in Islam, pubic and underarm hair is considered unclean for both sexes and is routinely shaved or waxed.” Bharati Mukherjee explains Hindu hair rituals in “Romance and Ritual.” She writes: “Unmarried girls and wives take guiltless pride in their long lustrous hair. But Hindu Bengali tradition requires widows to keep their heads permanently shaved as one of many gestures of penance.” Adriana Trigiani beautifully explains what we all know—society prefers straight hair to curly or wavy. In “Oh Capello” she writes: “I realize that this straight-hair-over-curly thing is real; they want curls banned. I’m a rebel—well, not exactly. I just do what’s easy—and easy translated from the Italian means curly (and if it doesn’t it should).” In “Much Ado about Hairdos,” Suri Hustvedt explains: “A never-combed head of hair may announce that its owner lives outside human society altogether—is a wild child, a hermit, or an insane person. It may also signify beliefs and political or cultural marginality.”

The essays are humorous, contemplative, provocative and honest. These women write about embracing the hair on their head. They develop styles to empower them. They generally do what makes them happy and do not conform to societal standards. Perhaps that’s why there are no twentysomething writers in this group. Twentysomethings are still figuring themselves out. Not that anyone figures everything out by any particular age; we just become a bit more comfortable in our skin and with our hair.

<em>FTC Disclosure: I received this book for review from Algonquin. </em>

purchase at Amazon: Me, My Hair, and I: Twenty-seven Women Untangle an Obsession

What My Mother Gave Me: book review 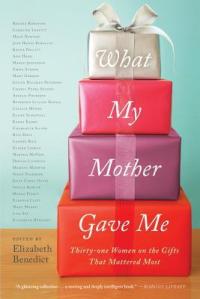 Mother-daughter relationships wrought with anguish, endearment, benevolence, resentment. In this essay collection, women write about their mothers with honesty, humor, empathy and depth. What did these gifts mean? What lessons did these women learn from their mothers? How have these gifts influenced them? Contributors include best-selling novelists, a U.S. Poet Laureate, Pulitzer Prize winners, NPR commentators and winners of the National Book Award. Maud Newton got books. Jean Hanff Korelitz’s mom gave her Sylvia Plath. Mary Gordon received a Circle Line boat trip. Mameve Medwed’s mother gave her a door. Joyce Carol Oates’s mother gave her a quilt. Lisa See’s mother gave her writing. Elizabeth Benedict’s mother gave her a scarf. It works either to dip into here and there or read from cover to cover.

Maud Newton: “I was expected to be a prodigy of some kind. My parents had married, my mother told me, not for love but because they believed they would have smart children together.”

Jean Hanff Korelitz: “I was adolescent (still), poetic, moody, feminist, and – it went without saying—misunderstood. It was only a matter of time before I fell beneath the sway of a certain strain of lyrical intensity, a white-hot declaration of brilliance and femaleness and power. The verse, in other words, was already on the wall.”

Mary Gordon: “And so, I have come to understand why she never got me presents, and this failure was the objective correlative of her inability to give me any useful guidance on a good way of being a woman. This, too, has been a cause for generous lashings of self-pity when I drink the hemlock of deprivation and regret for what I have not had, or what I had to earn or win myself, through luck or labor.”

Joyce Carol Oates: “After my mother died in 2003, for a long time I would imagine her with me, in my study in particular, though imagine is perhaps a weak word to describe how keenly I felt Mom’s presence. In writing the novel Missing Mom, I tried to evoke Carolina Oates—well, I’m sure that I did evoke her, not fully or completely but in part. Mom is so much a part of myself, writing the novel was the antithesis of an exorcism, a portrait in words of a remarkable person whom everyone loved.”

Lisa See: “She’d shown me that to be a woman, a mother, or a writer I must sacrifice, show courage, and be loyal. I must look for those authentic emotions. I can never give up or bow to people who tell me that I can’t write because I’m a woman, that no one cares what I have to say, or that I’m worthless.”

Elizabeth Benedict: “I kept my distance from both of them. I moved to California and changed my name, had a ton of therapy, moved back East, wrote several novels that were—beneath a kind of surface of glitter and glibness—fundamentally about women who had a hard time expressing their deepest feelings.”

I received this book for review from Algonquin Books.