The Valley of Amazement: book review 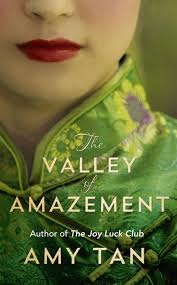 A sweeping story set in Shanghai, Amy Tan weaves a lush tapestry about mothers and daughters, a subject she writes exceptionally well. In 1905 young Violet lives a vibrant and lavish childhood in the courtesan house run by her mother, American Lucia [Lulu] Minturn. Violet never knows her father and her exotic looks combined with this mystery throw a wedge between mother and daughter. They don’t have the closest relationship. No cuddles, hugs and kisses. More formal. Businesslike. [“All I knew was a gnawing need for her attention and assurances. I wanted to feel without worry that I was more important than anyone else in her life. When I thought about it further, I realized she had given more attention to the beauties than to me.”]

When Violet overhears that she’s actually not American like her mother that she’s half-Chinese/ half-American, quite rare during these times and in most circumstances, she finds it unsettling. She’d be an outcast but her mother’s shielded her from being one. Born in China, Violet speaks fluent English and Chinese, a useful skill in her mother’s business. The story’s mostly told through Violet and it’s engrossing. Tan provides elaborate descriptions and character portraits. She leaves out few details.

When political unrest hits Shanghai making it unsafe for foreigners, a fellow American sets up passage to San Francisco for Lulu and Violet. Unfortunately the double-dealing Fairweather tricks Lulu and Violet gets left behind. The worst possible scenario: she’s sent to a courtesan house and her virginity’s sold to the highest bidder. Luckily the young man’s not so bad and Violet falls for him a bit but soon realizes that wasn’t the best idea. She must keep her head clear. In this next part of the novel, Violet transforms herself into a Svengali and survivor because that’s all she can do. 14 years pass with Violet in her role as courtesan.

“He must have expected I would be pleased to hear this kind of flattery. I instead, I felt I had instantly become a whore. He had wooed me, as any suitor would his favorite courtesan. He wanted the chase and capture, the self-denial and mock agony in between. My agony was real.”

While young at first she quickly learns that she must look out for herself and keep her wits about her and stay strong. A smart woman, Violet has her own ideas and manages her business dealings as she wants. As a feminist reading about the courtesan life through Amy Tan’s words I didn’t find it offensive. She handles it effectively and with style and Violet and Lulu both are powerful, intelligent women. Later Violet does truly fall in love with an American named Edward and they have a daughter. Violet realizes happiness for the first time. After Edward dies from an illness, his American wife and mother sweep in and take the child away devastating Violet.

This courtesan world isn’t glamorous or romantic. It’s a working world. Not the gritty street life of a prostitute but a courtesan in turn-of-the-century Shanghai needed to remain popular among patrons to make money and not get demoted to a worse house or to the streets. Plus most courtesans only had a limited amount of years in which to remain in favor as courtesans. Sadly men like the women young. Sexist world the sex trade. Tan provides a glimpse into this little known world with Violet’s tumultuous story and her eventual reunion with her mother and her daughter.

FTC Disclosure: I received this book for review from the ECCO/Harper Collins.