Here’s the thing with this novel: I liked the details of Connecticut [generally a blandish state] and Fairfield County in particular (I lived there for eight years as a child) more than I liked the main character. Knopf proves quite good in writing about place, usually Long Island. In Dead Anyway he’s introducing readers to a new character and another series. At the beginning of the novel, Arthur Cathcart returns home to find a gun pointed at his wife Florencia. The gunman shoots them both in the head. Florencia, who works for an insurance company dies on site. When Arthur regains consciousness, he insists that his physician sister Evelyn declare him dead so he can track Florencia’s killer. And we’re off. Arthur works as a geeky numbers researcher and handily hacks into computer and security systems.

It’s a page-turner due to the horrific crime committed to Arthur and his wife. Also as a reader you want to know why someone would do this. Throughout Arthur’s ordeal to uncover why someone targeted his wife, Knopf includes magnificent, detailed descriptions of Connecticut [“So it was no charade for me to walk into a small shop in Westport that stank of wool, silk and leather, and completely give myself over to the predacious attentions of a tiny white-haired man named Preston Nestor.”] are magnificent and fascinating post-coma, post-gunshot information [“I welcomed the lush euphoria of semi-consciousness, where I could note the staggering destruction that had been done to me without feeling its effects.”]

Unfortunately Knopf doesn’t provide enough about Arthur to wholly feel concern for him. His well-being really didn’t matter to me in the end. Following him on the run and in disguise as various characters tends to be a fun thing but in the end I remained rather neutral about the real guy. If he’s going to be the center of an entire thriller series than the author needs to bolster that central character and make him much more layered and compelling. Right now he’s flat. 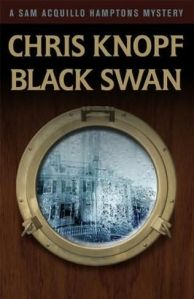 Hi-tech, wealthy island enclaves and sailing factor into the intrigue of Black Swan. This is the fifth Sam Acquillo Hamptons Mystery yet it’s my first. My mom read and enjoyed all the others. For some reason, I decided to give this one a shot and it didn’t disappoint. Warmer weather often means lighter reads such as mysteries. Set on the exclusive and wealthy Fishers Island, Black Swan includes all the elements for an engulfing read: money, power and unpredictable weather.

A general rule for writing is to write what you know. Author Chris Knopf worked as a PR executive and wrote various copy which serves him well in his mystery writing–particularly technical papers about chemical engineering and biotech companies. He prefers to be close to the surf, dividing his time between Connecticut and Southampton, NY. And apparently so does his amateur sleuth Sam Acquillo.

I’d always known this about Fishers Island. At the easternmost reach of Long Island’s North Fork, it’s a place that doesn’t want you there. Three-quarters private, gated club populated by the oldest money in the country, the other quarter a mix of merely wealthy summer people and year-round locals who fully shared in the island’s rabid xenophobia.

While sailing back to New York from Maine, Sam Acquillo must suddenly dock in the nearest harbor when the boat falters and needs to be repaired. Sam, his long-term partner Amanda and his dog Eddie find themselves in the unwelcome setting of off-season Fishers Island, a haven for the uber-wealthy. The exclusive year-rounders aren’t eager to assist Sam with his boating issues. Anika Fey, the daughter of the new owner of the Black Swan hotel, proves to be the only one interested in harboring Sam’s boat because she’s immediately attracted to the strong, quiet former engineer turned skilled carpenter.

As Sam fixes the yacht and waits out the storm, he finds himself involved in an “intricate tale of technological imbroglio.” Sam has unique connections, a sharp wit and an unflappable spirit. He’s so laid back that his girlfriend Amanda gets flummoxed by his commitment issue or inability to have a more solid relationship. He tells her: “I’m lousy at the conventions of intimate relationships.” There’s something eerie happening to the Fey family and Sam cannot leave Fishers Island until he’s figured it out. Is Anika a flirt or a manipulator? Who wants to hurt Axel Fey, Anika’s awkward genius brother? And what kind of trouble does Christian Fey really have with his mega company?