When She Flew: review, author interview and giveaway

Posted by Amy Steele in Books, Interview on December 31, 2009 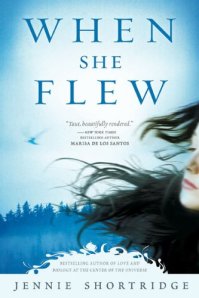 In When She Flew, author Jennie Shortridge creatively focuses on two controversial and often overlooked issues: homelessness and child custody. In basing her novel on a true story about a Vietnam veteran forced to live of the grid, hiding in the woods with his 13-year-old daughter, Shortridge provides an empathetic and unique perspective into these issues through the viewpoint of the daughter, Lindy and one of the police officers involved in the case, Jessica Villareal. When She Flew is thought-provoking and you get deeply involved with the characters on both sides. It’s about the bond between parent and child, doing the best thing even if the decision to reach that point is complex and it is about so much more. The story provides plenty of suspenseful moments. I do not want to give anything away. Lindy and her father always had an escape plan if anyone encroached on their living situation. He knew no one would understand.

Officer Villareal [Jess] becomes complicit in allowing Lindy to reunite with her father and in essence escape from police custody and Child Protective Services or foster care. A mother herself, who had her own daughter choose to live with her father, Jess becomes almost haunted and truly invested in this case, knowing how the separation from her own daughter has changed her own life and how difficult it has been to repair the damages from the past.

Jess has many regrets about her past and in helping Lindy stay with the father that protects her and loves her, she feels she might be protecting this girl despite completely disobeying police orders. Will her career be in jeopardy due to her actions or will the police force understand in the end? Shortridge has written a compelling, provocative novel that is certain to spark numerous conversations and hopefully drive some people to action to help those less fortunate than themselves.

Jennie agreed to answer a few questions for me.

Amy Steele [AS]: Jennie, thank you for answering a few questions. I mainly asked questions from the early part of the book so that I wouldn’t give anything away.

AS: What is the significance of the herons and other birds in the book, like the barn owl?

Jennie Shortridge [JS]: From the moment I started to write Lindy, she was enamored of birds. She kept a rescued barn owl as a pet, and followed a heron out of the woods, setting the story in motion. Birds and flight became a metaphor not only for Lindy’s journey in the story, but for the other characters as well, including police officer Jessica Villareal and her estranged daughter, Nina. When it came time to give the book a title, which I tend to do at the end, When She Flew seemed to sum it all up!

AS: What type of research did you do on Iraqi war veterans and PTSD?

JS: I’ve long been interested in post-traumatic stress disorder, and how it affects those who’ve been through harrowing experiences. I’ve talked with mental health experts and read a lot of material, and talked with the police officer who was involved in the true story that inspired When She Flew. I’m really concerned about the plight of our returning veterans, so I wanted to help raise awareness of this issue. It’s estimated (and it’s probably a low estimate) that 30 percent of our returning veterans are dealing with PTSD.

AS: How do you feel about the treatment of homeless people especially based upon how they choose to live or on their appearance?

JS: Also close to my heart are the populations we often overlook and dismiss, such as those who are homeless or mentally ill. People are people. Humans are human, regardless of the situations they find themselves in due to illness, poverty, or just really bad luck. Some people in our society want to blame those kinds of folks for their plights, and by blaming them, clear their consciences of neglect. Call me a bleeding heart, but I think we need to help each other; we need to find ways in our society to make sure we are doing the best we can for all people.

AS: Why do you think people have such preconceived notions about the homeless and by writing this book what did you hope to achieve regarding people’s thought process towards the homeless?

JS: I have to imagine there are as many reasons that people turn away from those who need help as there are people, but I’m guessing it’s because it’s too ugly, too raw, too uncomfortable to face. We are a society based on fear at the moment. We fear anything that doesn’t come in a government approved hermetically sealed package. We fear humans who look different from us, who act differently, who make different choices. My hope in all of my books is always to expand awareness of the different kinds of people who populate our society, and to reveal their humanness, their vulnerabilities, their strengths, their beauties.

AS: As this was based on a true situation, how similar was the situation that the man you read about living in?

JS: I did a lot of research on the actual case, hiking into the forest to the actual encampment, walking the same paths and trails and streets. I met with the police officer countless times. I wanted to get nitty gritty details right so that I could fictionalize others believably. The father was an older man, a Vietnam vet, but his daughter was about the same age as Lindy. Their living situation was very similar, although they lived in a lean-to. Their trajectory away from the forest was similar, although I changed the story pretty dramatically to make it my own and not theirs.

AS: Why did you choose the swastika for Lindy and her father as their protective symbol?

JS: That’s actually a detail I chose from the true story because it was so compelling and made it so clear that the police had to intervene. There aren’t many symbols that have that kind of power and double meaning!

AS: How does Jess’s relationship with her daughter affect her decisions related to Lindy and if Jess were a male police officer how would the dynamics change?

JS: The actual police officer was a single dad, so I don’t think gender was as much at issue as it may appear. I think a parent is a parent, a fierce protector, a softie in the middle for a kid’s well-being. Jess is estranged from her own daughter and young grandson, and she is searching for some kind of connection. Lindy becomes a surrogate, in a way, a second chance to do right by a child, and Jess grabs at it.

AS: What was your greatest goal in writing this book?

JS: To serve the story without exploiting the actual people. It’s the first book I’ve fictionalized from real life, and I took that responsibility very seriously. Now I’m working on another story that fascinated me in real life, and I have to say, it’s really fun in addition to being a great challenge!

AS: Thank you! I enjoyed the read. Have a happy New Year.

Thank you to TLC Book Tours for setting up the Book Tour and to Jennie Shortridge for such expediency in answering the questions and providing me with a copy of her wonderful novel.

BOOK GIVEAWAY: Jennie Shortridge has been kind enough to offer to give away ONE copy of the novel When She Flew. Please leave your email in the comments. Open to U.S. residents only. Contest ends January 8.