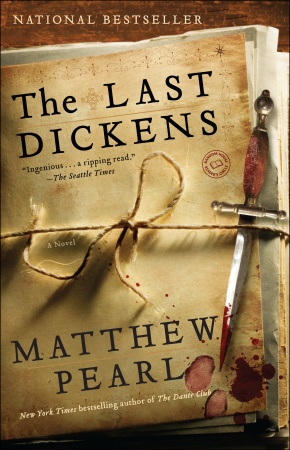 The whole world awaited it, as had been true of each Dickens novel since The Pickwick Papers and Oliver Twist placed the former court reporter’s name before the public thirty-five years before. Dickens alone, among all the writers of popular fiction of the day, could employ wit and discernment, excitement and sympathy, in equal parts in each one of his books. The characters were no mere paperdolls, nor were they thinly veiled extensions of Charles Dickens’s own persona. No, the characters were utterly themselves. In a Dickens story, readers were not asked to aspire to a higher class or to hate other classes than their own but to find the humanity and the humane in all. That is what had made him the world’s most famous author.

The Last Dickens engulfs readers and transports us to times and methods gone by in the writing and publishing world and the rather seedy opium business. Who knew that there were Bookaneers [scrappy people who stop at nothing to access unpublished works by various authors] and such vengeful publishers about? Today of course there are bidding wars between publishing houses for someone’s memoir or novel but it is not the pirate-like business in which author Matthew Pearl describes in The Last Dickens. The novel inventively imagines what might have happened if Charles Dickens’s Boston publisher Ripley Osgood attempted to discover the final pages to Dickens’s unfinished novel The Mystery of Edwin Drood in 1870 after Dickens death.

From the brownstones and cobblestone streets of Boston to dark corners and publishing houses in New York to opium fields in India to opium dens in London and Dickens’s estate in England, Pearl captivates the reader with a story that is so dense with information about Dickens and the publishing industry that one feels simultaneously educated and entertained. Pearl is an impressive, brilliant, creative author with an eye for detail and adoration of Dickens that catapults this page-turning literary thriller. Pearl provides us with a front row seat for Dickens speaking tour of America. He includes an element here and there that enriches the experience set forth by his flourishing words. The Last Dickens remains engaging, detailed and riveting right up to its surprising ending.

[This was a difficult review for me to write because whatever I say about The Last Dickens, I feel I will not honor author Matthew Pearl’s exhaustive research and dedication to the subject matter. I also respect and admire him greatly as a writer.]