Posts Tagged Careful What You Wish For

book review: Careful What You Wish For 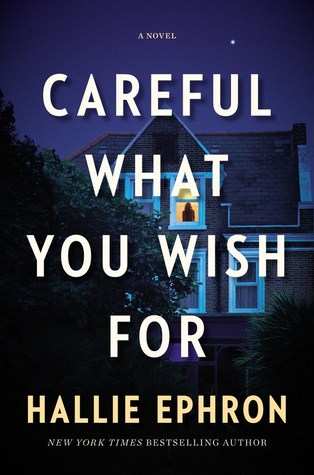 “Months later, bright and early on this muggy August morning, as she stood in her sunlit bedroom in shorts, a tank top, and flip-flops, the message those socks whispered to her heart was more about privilege than joy. Who on earth needed so many pairs of socks?”

After a video of her organizing her sock drawer goes viral, Emily Harlow decides to leave her job as a teacher to launch a career as a professional organizer. Emily’s lawyer husband remains immune to Emily’s de-cluttering skills, he spends every weekend browsing yard sales. The attic, garage and basement are all filled with her husband’s collection. Emily and her partner Becca have two new clients: an elderly widow, Mrs. Murphy, who needs to de-clutter her late husband’s storage unit and a young woman, Quinn, whose husband won’t allow her things into their home.

Emily finds rare books in the storage unit that appear to have come from several libraries–“Emily was no expert, but it certainly looked old. It was an engraving or an etching, though Emily didn’t know the difference. With no tears or foxing, it was in pristine condition. She used her phone to google the words on the label. Back came a link to an auction house that, in 2012, had offered what looked like the identical map. According to the description, it was published in London in 1624. In “excellent condition,” it had a value estimate of . . . Emily blinked . . . $12,000. If the map in front of her was worth that much, and if it turned out to have been on permanent unofficial loan, she and Becca were catapulted into felony territory.” Did Mr. Murphy steal these books and other antiquities or acquire them legally? Emily brings her librarian mom in to assist with this project. When Emily meets Quinn, after several glasses of wine, the conversation turns personal as Quinn expresses a desire to get rid of her husband. When the husband goes missing and then is discovered dead in the widow’s husband’s storage unit, everyone becomes a suspect. It’s impossible to ignore the similarities between an expensive art collection in Quinn’s house and Murphy’s rare books. How would these men have known each other? Emily’s husband’s law partner recommended that Quinn contact Emily. What’s his connection to all this?

De-cluttering almost always leads to some sort of discovery, often something personal. There’s a reason why people collect or hoard things. Oftentimes it’s to fill a void or due to some emotional connection to their things. According to the Mayo Clinic, hoarding disorder is “a persistent difficulty discarding or parting with possessions because of a perceived need to save them.” Most everyone has seen at least one episode of Hoarders or Marie Kondo’s Netflix show. This topic can go in lots of different directions and provides an intriguing theme.

If you like novels by Elinor Lipman, you’ll like the work of Hallie Ephron. Both women write witty, humorous, observant novels with mature characters. And not mature in any negative sense but in that these are highly capable, experienced women. It gets tiresome to read about 20- and 30-somethings once you’re in your 40s or 50s (I just turned 50). There are a lot of books about 20- and 30-something women out there. It’s refreshing to find older characters with whom one can relate. I appreciated this: “In the month since Emily had least seen her, her mother had dyed her hair red and cut it short and spiky. As she’d told Emily countless times, the problem with getting older was that women over sixty were treated as if they were invisible. At sixty-five, between the hair, a short silk caftan in swirling shades of pink and purple, and the layers of bangle bracelets that jangled whenever she gestured, Lila showed the world just how determined she was not to disappear.”

If you like suspense novels, this one doesn’t disappoint. Be Careful What You Wish For is an ingenious and amusing novel that makes a great summer or vacation read.

I received this book for review from William Morrow.