Years ago I read the wonderful short story collection Of Men and Cats by Nina de Gramont. This is the first novel I’ve read in some time that I wanted to read and read and read and not switch over to another book for a bit. The setting is mostly New England: Amherst; Cape Cod; Maine. It starts with a murder. Someone murdered Brett’s husband Charlie. “What did I know about the way my life would change in a matter of hours? Absolutely nothing. Murder. It’s a word out of potboilers and film noir. It leaps from the TV screen during police dramas or the evening news. It doesn’t sound real. It’s nothing you ever think will have to do with you.”

While Brett comes to terms with her husband’s death and wonders who killed him—all signs point to the schizophrenic brother—author Nina de Gramont takes us back to explore how Brett and Charlie met, as well as complications in their marriage mostly due to Charlie’s infidelity and inability to keep a job. Brett lived with Charlie in a seaside cottage on the Cape. Meant for seasonal occupation, it’s her husband Charlie’s summer home. Brett fell in love with Charlie during college when they spent one magical night together skiing under the stars in Colorado. Brett had been friends with Charlie’s brother Eli. But Eli suffered a scary and devastating breakdown which scared Brett and he subsequently left college for treatment.

Years later Brett runs into Charlie on Cape Cod with her fiancé Ladd [who knows Charlie’s family] and the two pick up as if time never passed. “Anyone could have told me, and I knew even as I moved forward: This whole thing was a mistake. A disastrous mistake. Charlie had already rejected me once. And now I was leaving Ladd, breaking off my engagement, for a man who hadn’t even said he loved me and maybe never would. Charlie was scattered, penniless, jobless. Who knew what he even aspired to, as far as character, as far as life?”

Charlie remains close to Eli and constantly protects and rescues Eli –when he’s off meds or finds himself off the rails– which makes Brett both wary and uncomfortable. “It took several seconds to recognize Eli. In my mind, he had separated into two different people: the great friend who’d always had my back and the scary stranger who appeared one night, and then disappeared, taking the original one with him. Now there seemed a third one, barely recognizable across those distant years and miles.”

Brett becomes consumed by Charlie. Her world revolves around Charlie. Brett works to complete a PhD in 19th century poetry while Charlie doesn’t even read. There are numerous connections to Emily Dickinson throughout as Brett studies 19th century poetry and lived across the street in Amherst from the Dickinson home.

It’s a devastating and destructive relationship. Brett loses her sense of self when she’s with Charlie. “And I didn’t just love him. I loved him enough to stop caring about anything else. I loved him enough to wreck my life. I loved him the way you dream about being loved, when you don’t even know you’re dreaming.” But is that enough to keep them happy and together. Is Brett more devoted to Charlie than Charlie to Brett? Did Eli really kill the brother who loved and cared for him unconditionally or is there a third party involved?

<em>FTC Disclosure: I received this book for review from Algonquin Books.</em> 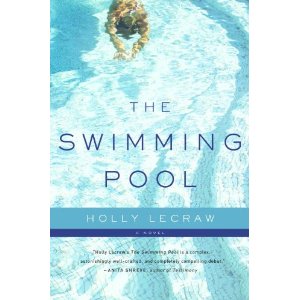 Holly LeCraw is a first-time author to watch. She’s written quite an unpredictable page-turner. The Swimming Pool contains a plenitude of secrets that could have devastating effects on all involved. The setting: Cape Cod. Siblings Jed and Callie take some time off to stay at the family’s house on the Cape. Jed leaves his job in Atlanta and Callie leaves her husband back in Greenwich, Conn. Callie has two young children and her husband works in New York during the week. The story involves intricate family secrets that connect two families in rather unexpected ways.

Both Callie and Jed have many questions and unresolved feelings toward the deaths of their parents. Their mom Betsy was killed at her home in Atlanta and the case remains unsolved. Their father also died under mysterious circumstances—most likely a heart attack—at the wheel of his car. LeCraw deftly unravels the past and mixes it with the present through a riveting narrative style. Jed finds a bathing suit boxed up on a shelf in the attic and recalls a beautiful woman named Marcella, an acquaintance of his parents. He concludes that his father was having an affair and when he travels to Connecticut to speak with Marcella, he ends up engulfed in a fiery relationship with her. Why I waited so long to pick up and read this book, I have no idea. When people want suggestions on great summer reads, I would absolutely recommend The Swimming Pool.

buy at Amazon:
The Swimming Pool