These streets have an expiration date.
–Tango [Don Cheadle] 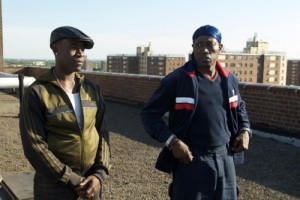 Boasting an outstanding [albeit mostly male– though in a small role Ellen Barkin blasts through the few scenes she has as a hard ass top brass] cast, Brooklyn’s Finest is a gritty, violent and shocking film. Three police officers, with vastly different career trajectories, struggle to rise above the filth and danger in Brooklyn. All three officers fight off job fatigue to hit individual goals: retirement, a house, a promotion. Eddie [Richard Gere] is mere days away from collecting a pension and moving to the idyllic quiet of Connecticut. Sal [Ethan Hawke] lives for his family and plans to buy a house so that his pregnant wife [Lili Taylor] won’t be so sick. Tango [Don Cheadle] aches to be done with undercover work and be promoted to detective. 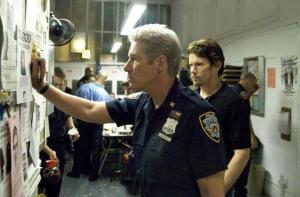 So over his police officer job and just counting the days, Eddie aims to stay out of trouble. When a rookie cop gets in the middle of a domestic dispute, Eddie pulls him away and tells him that they don’t act of their precinct even though the guy totally smacked the woman while arguing outside their car. Sal becomes so desperate for money that he starts eying that of the drug dealers he busts. He’s frantic and going to blow [Hawke is so entrenched in this role that I didn’t immediately recognize him]. Tango finds himself in the ultimate dilemma: help take down a drug dealer or protect sometime he’s grown to care about. Caz [Wesley Snipes in a nearly unrecognizable, toned down performance] is not the flashy prototype but he’s one cool cat.

In the end, all three men end up in the same dangerous location with tragic and stunning consequences. Director Antoine Fuqua [Training Day] helms this stellar examination of what motivates the three officers. Delving into each officer’s life and telling separate yet intersecting stories catapults Brooklyn’s Finest beyond the predictable, clichéd cop film. Gere exudes wear and tear and numbness. Hawke rocks the Brooklyn accent and turns in a darkly nuanced performance. Cheadle exudes coolness with this bold, layered role. It’s a disturbing, bloody and provocative film. The brilliant, solid cast and potent writing, makes Brooklyn’s Finest an authentic, unflinching film.