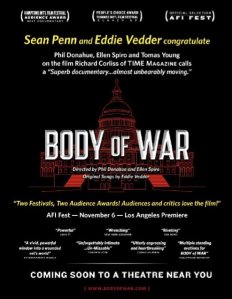 During the Gulf War, I wrote letters to four guys serving over there. After 9/11, like many Blue-staters, I put an American flag decal-type thing (my friend and I printed them and laminated them at work) on my car and drove around with it for perhaps six months. For some reason, I didn’t think about writing letters until recently. After reading Elizabeth Berg’s tearjerker about WWII, Dream When You’re Feeling Blue, I found one via the website Adopt a US Soldier. Now I have been writing to PFC Michael Spaeth, stationed somewhere in Iraq. He thanked me profusely and told me how much he appreciated it. I (ever the journo) questioned this.

His reply: What I mean by it means a lot and I owe you, is that some of the people we fight to defend don’t appreciate what we do. We fight for them to be free to protest and picket us. But then there are those who support us and for that I feel we owe a debt of gratitude. I know that to someone such as yourself, it may not be a big deal to write and send packages to soldiers, but to us it’s not a big deal to be here fighting for our country. I don’t feel that anyone owes me anything for what I do. So when somebody takes the time to write letters and so on, it means a lot. I don’t expect those kinds of things and that makes it all the more worth while.

When I re-read Michael’s message I still do not understand what he means when he says fighting for our country. Does he really think that being in Iraq is protecting us? I did not reply to that part of his e-mail and in letters I say that I hope he is safe. I don’t often know what to even say. He’s only 22 years old. But he has two small children. Though I’m a decade older than him, our life experience may be equal though incomparable.

This brings me to the film Body of War. Collateral damage, conflicted participants, conscientious objectors? Check. Check. Check. As seen through the eyes of one 25-year-old disabled veteran, Tomas Young, the war is not over once the soldiers come home. There are numerous challenges ahead. He’s dealing with a wife, self-catheterizations and trying to make a place for himself now that he’s paralyzed from the chest area down. This is definitely an aspect of the war that most Americans have remained shielded from. Sure we hear that 4,000 American troops have died but do we see the veterans who come back with PTSD or missing limbs? And what of our great superpower democratic United States? The Congressional vote on the war resolution in 2002 is interspersed through the film. The greatest voice of opposition, West Virginia Sen. Robert Byrd, has a touching moment in his office with Tomas.

It should spark debate in everyone. I’m against the war and I’m against staying in Iraq any longer. My sort-of boyfriend Brian also opposed the initial invasion but supports the slow withdrawal. I’m sure everyone has a different opinion about that colossal mess. Body of War is produced by Phil Donahue, so you know going in that it’s going to be very left-leaning. I also saw the film in VERY liberal Cambridge, Mass. The audience clapped when the film ended (this was Friday afternoon). I know many are war weary and have been staying away from Iraq-themed films in general, but this film feels a bit different. It’s very personal and evocative. Eddie Vedder’s original songs are stirring, heart-wrenching and honest. While at times Body of War can be overzealous or preachy and a bit obvious in its anti-war message, it provides us with another viewpoint: from a front row seat. The heartfelt story of Tomas is extremely moving, thoughtful and memorable and worth the trip to the theater.