“It wasn’t enough to teach a handful of desperate women specific methods. I needed to overthrow archaic laws, reshape public opinion, and enlighten, or at least outsmart, the men in power who were determined to keep us in chains. But how? Should I break the laws in order to win judgments in the courts or lobby legislators to write new laws? Should the issue be free speech or women’s rights or public health, which was just beginning to garner attention?”

How infuriating that there’s no Equal Rights Amendment and abortion and women’s health remains under attack almost as much now as in the early 1900s! Terrible Virtue is the perfect novel to read for Women’s History Month. Written like an autobiography in first-person and then commentary/testimonials from various people in her life—her husband, lawyer, sister, son—at first jarring but by one-third of the way through the novel it worked. This is one engrossing novel.

A sign of quality historical fiction for me is when I want to know more. I want to read Margaret Sanger’s autobiography. I learned many things in this fictionalization but I have many questions. A historical fiction novel’s author must choose which aspects of the person’s life to focus on. If it veers in too many directions, it’s confusing. Author Ellen Feldman succeeds with Terrible Virtue by providing a colorful and detailed characterization of women’s rights and women’s health activist Margaret Sanger. She’s bold. She’s unapologetic. She’s a trailblazer. She’s an independent spirit.

Sanger was one of 11 children. Her mother died at age 50 from tuberculosis after 18 pregnancies in 22 years. Her alcoholic free-thinking father did not believe in birth control. Her upbringing led her to want more and to want to change the status quo for women. She chose to assist impoverished women in avoiding pregnancy. It became her mission. Although she and her sisters declared they’d never marry, Sanger married artist Bill Sanger. Together they join the socialist party. Of marriage to Bill she said: “Perhaps that was another reason I married Bill, to break silly rules and defy foolish prejudices. My marital status would have no effect on my nursing ability.” At the time Sanger is in nursing school. She gets pregnant and cannot complete the program however becomes a birth control advocate traveling the world to research various birth control methods. She started clinics where poor women could be treated. She and Bill had two children (one dies) but Margaret was accused of neglecting her children to focus on her career.

After a brief stint in the suburbs, the couple moved back to New York. “We told people we wanted to be at the heart of the radical movement and the world of art. That was true. Ideas and isms raced through the city faster than the flames that had whipped through the Triangle Shirtwaist Factory. On street corners, labor leaders and anarchists and socialists climbed up on soapboxes and made the ground tremble beneath their feet.”
Sanger insisted on an open marriage, perhaps more so than her husband. Many gossiped about her numerous affairs but as long as it didn’t interfere with her goals she just didn’t care. “Ours would be a different kind of union, a melding of two equals based on love, mutual respect, and total freedom. We were committed to sexual equality.”

She began talks for women about birth control and the connection between their bodies and minds. “I merely explained the facts of life. It’s shocking how few women are acquainted with them. They know about demanding husbands and agonizing deliveries and painful menstruation, but they understand little of the connection among those things.” Soon Anita Block of the Socialist Party asks Sanger to write a series of articles for the Call, the New York socialist daily which leads to her publication of a magazine. The Society for the Suppression of Vice began to monitor and censor Margaret. Her Captain Ahab was a man named Anthony Comstock, described as “a big brutal bully with a dirty little mind.” Sanger was arrested in 1914 for distributing a pro-contraception magazine, The Woman Rebel, through the mail. Then in 1916 she was arrested for running a clinic to disseminate the information. She’s arrested many more times. Sanger escapes to Europe but does serve some jail time once back in the states. She also finds ways around the regulations. A superb read!

book review: In Our Control 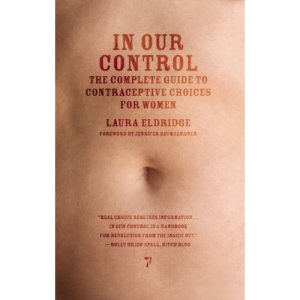 A decade ago, I had an exploratory laparoscopy and asked my gynecologist if she would complete a tubal ligation as well. She insisted that I wait a few years to think it over. I’ve always known I do not want children. I’ve never heard a biological clock ticking. When I saw a 29-year-old guy interviewed on The Today Show because he had elected to get a vasectomy, I fumed. Are all women supposed to WANT to give birth or expected to desire children? What could possibly be the reason why I was denied tubal ligation at 29 yet a guy could get a vasectomy? Our sexist society.

I am such an adamant safe sex advocate that I carry my own condoms with me. Two years ago, another gynecologist at Brigham and Women’s Hospital suggested that I consider getting an IUD inserted for birth control. I hadn’t heard much about IUDs and now I’m considering getting one. In Our Control: The Complete Guide to Contraceptive Choices for Women by women’s health writer Laura Eldridge provided me with detailed and enlightening information about the IUD that I didn’t know. Eldridge covers the Pill, IUDs, Plan B [the morning after pill], HPV vaccinations and more. Women’s health– particularly women’s sexuality and contraception– is rarely addressed to the extent it should be.

Putting women in control of reproduction means addressing these social issues. Building reproductive freedom, including the ability to make contraceptive decisions, means working to give women—not the many cultural forces and people in positions of power around them—the ultimate right to make individual choices about pregnancy.

In Our Control doesn’t read like a scientific article but a wise and thoroughly researched expose on all aspects of contraception. Eldridge writes in a practical, often conversational format which should appeal to readers at all interest levels. This fascinating book presents women with the information they need to consider the appropriate contraception for their bodies. Every woman is different and every form of contraception isn’t the right one for every woman. Eldridge delves into the pros and cons, the history, and some future thoughts and goals of the medical community, the Big Pharmas and government agencies. In Our Control should be kept on one’s bookshelf for reference next to Our Bodies, Ourselves and FLOW.