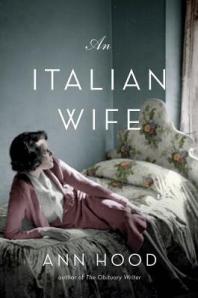 An Italian Wife isn’t a novel but a series of inter-linked stories. I liked it at parts but mostly it became redundant. Ann Hood authored Comfort, one of the most poignant, honest memoirs I’ve read. It detailed the grieving process after her 5-year-old daughter died from a virulent form of strep throat. Her last novel The Obituary Writer contained elements of Comfort in a captivating, melancholy manner.

Unfortunately An Italian Wife ultimately disappointed. These women are trapped by marriage. Hood said she wanted to pay tribute to her Italian ancestors. I think there are multiple other ways she could accomplish that. It starts with a 15-year-old Italian girl, Josephine Rimaldi, married off to an Italian who’s moving to America. Her family says it will be a better life for her. How many girls today are married off because they’re girls, because they have limited options, because they’re not valued as much as boys and men. The subsequent stories link to her because they are about her daughters and granddaughters. Marriage and family– the expected life for a woman. The domestic, subservient role. The wife. The caretaker. Birthing many children and not having her own thoughts, plans and dreams. Lots of sex, lots of longing, plenty of dissatisfaction with current living situations. Understandable but it starts to get cliche after a while.

FTC Disclosure: I received this book for review from W.W.Norton