Posts Tagged a world I never made

book review: A World I Never Made 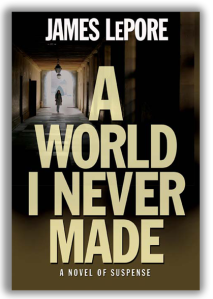 Megan, I too have read your articles. I know you are a serious writer. I do not doubt that terrorists are incubating in Paris and Madrid. But this is an Arab country. Nothing is as it appears. Secrets here are the most valuable of currencies. The Arabs in Europe are outré. They will talk because they are isolated and perhaps desperate. Here you will get only polite nonsense.
–Abdel Lahani

Yet another attorney turned thriller writer, James LePore adeptly draws the reader into a page-turner involving a faked suicide, a young journalist on the run and a possible terrorist plot. His simple, straightforward writing style propels the story and sets its pace and mood. LePore’s exhaustive research on the various countries, as well as the unique historical elements, provides authenticity and increases the level of intrigue of A World I Never Made.

Expatriate American journalist Megan Nolan has lived abroad off the luxuries of well-to-do lovers (and freelance articles) for well over a decade, accumulating an impressive array of passport stamps. Megan’s father, Pat Nolan, gets a call that she has committed suicide and he needs to come to Paris to identify the body. Megan has actually faked her suicide and left some clues for her father. Pat teams up with a beautiful, savvy French detective named Catherine Laurence and the two risk their lives to find Megan. They also fall in love. Meanwhile, Megan is in Morocco seducing her latest man and also doing some risky research on a terrorist cell. The Saudi Arabian businessman Abdel Lahani is more dangerous than even worldly Megan can handle and she soon finds herself in grave danger. Soon the FBI, French police, Saudi version of the FBI, gypsies and some terrorist thugs are all searching for Megan, Pat and Catherine.

Pat had not talked Megan into anything since she was in high school, maybe even grammar school. But this was not as hollow a statement as it would have been a few weeks ago. He was convinced that his one-of-a-kind daughter had laid down a trail for him, a trail through a minefield, trips wires everywhere.

The characters zigzag through France, Morocco, Saudi Arabia and the Czech Republic. While there are some superfluous moments with the romance between Pat Nolan and Catherine that slow the story down, in general it is a fine debut. A World I Never Made contains plenty of unexpected twists and red herrings to keep the reader guessing until the shocking ending.

a world I never made, espionage, james le pore, thriller