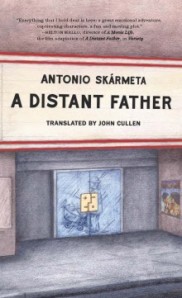 “In the course of an hour, I notice that the little town I’m in moves about as slowly as a watch, and I try to think up some possible conversational gambits to use on the girls.”

Seek out this beautiful and witty novella about a schoolteacher named Jacques who lives in a small Chilean village and works as a French translator for the local paper. He learned to love and speak French from his Parisian father, Pierre, who abandoned Jacques and his mother without a clear explanation a year ago. Will he let his father’s disloyalty affect his life.

Isolation in a town where few place an interest on learning and thinking doesn’t help matters for the intellectual Jacques. He finds flirtation with a student’s older sister passes the time. Can he subsist with such simplicity and not knowing the truth. During a visit to a nearby town, Jacques runs into his father with a young child who looks strangely familiar. How important is the past to one’s present. How far will Jacques go to forgive his father.

Skarmeta writes lovely phrases such as: “She strokes her chin, and for an instant she looks like a ballerina. She’s a shallow, distracted woman whose beauty is marked by melancholy.”

In this brief but solid endeavor one gets a clear sense for how Jacques feels about his father’s abandonment and digression. How having a father who left his life makes him feel in his small village today. He’s a bit aimless, a bit searching and a bit incomplete. He seeks answers. It’s charming and direct. It succinctly provides a clear sense of Jacques and his difficulties with both himself and his father’s abandonment. Which must be difficult at an older age. He questions who he is now and where he’ll be later. Skarmeta’s previous works served as the basis for the films No! and the Academy-award winning Il Postino: The Postman.

FTC Disclosure: I received this book for review from The Other Press.

purchase at Amazon: A Distant Father

A Distant Father, Antonio Skarmeta, Chile, The Other Press