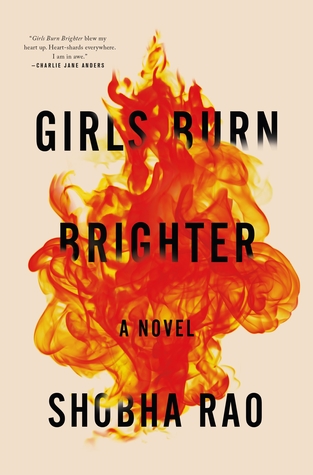 Girls Burn Brighter is a devastating, provocative and beautiful novel which illuminates the  horrific reality of sex trafficking and domestic abuse. Growing up in an impoverished village in India, Savitha and Poornima lack choices such as furthering their education. Instead, they’re expected to marry young and start families. After Poornima’s mother dies, she’s expected to care for her father and younger siblings. Which she’d rather do than be shipped off to marry. The bright spot remains the strong friendship that Savitha and Poornima established. They create saris on looms which Poornima’s father owns.  The women initially think that they might be able to succeed on their own and not have to agree to an arranged marriage. Savitha’s independent spirit and veracity inspires Poornima. Together the women become determined to forge a better reality. Although these women face repeated horrific abuse at the hands of men, author Shobha Rao makes readers both root for the women and wonder what they’ll do next to escape their predicament.

“She walked to the edge of the terrace and looked at the first stars, and she thought of how many years she had left to live. Or maybe she had none at all. It was impossible to know. But if she didn’t die tonight, if she didn’t die within the amount of time a human being can readily foresee, can honestly imagine (a day? a week?), What, she wondered, will I do with all those years?”

In one of the worst betrayals and examples of abuse, Poornima’s father, a nasty alcoholic, rapes Savitha. Villagers sadly require that she marry him. She runs away. Soon after, Poornima enters into an arranged marriage with an awful man and family who treats her like a servant. Her husband and his mother “accidently” burned Poornima’s face with cooking oil, leaving her with terrible scarring—“And if she had ever been pretty, she certainly wasn’t anymore. She stepped closer, and then she raised her hands to her face and removed the bandages, one by one. The left side of her face and neck were just as she imagined them, or worse: flaming red, blistered, gray and black on the edges of the wide burn, the left cheek hollow, pink, silvery, and wet, as if it’d been turned inside out.” Someone has the audacity to tell her that as long as she has “proper breasts” her husband won’t leave her. This reminds me of a dark, wonderful film called Lady Macbeth where the man made his young wife face the wall while he penetrated her. She flees the situation, determined to find her friend.

Many of us have been used/abused/disrespected by men. So what keeps us going? What motivates us every day and brings us moments of joy? Connection. Many will relate to these women and their bond as well as their will to thrive in some way in this bitter, brutal world that devalues women.

“And now, she realized, that’s all she’d ever be in the eyes of men: a thing to enter, to inhabit for a time, and then to leave.”

Savitha gets drugged and forced into prostitution. She’s locked in a room and required to service numerous men daily in a brothel. There’s a particularly disgusting moment when they want to sell Savitha to a wealthy man in the Middle East with a proclivity for amputees. They amputate Savitha’s arm but then the man decides on someone else. Savitha gets shipped off to Seattle to clean houses. She’s told if she tries to leave or tell anyone about her situation that there will be dire consequences for her and her family back in India.

A resourceful and determined Poornima ends up working as a bookkeeper for the sex traffickers. She’d managed to pick up enough from studying her husband’s spreadsheets. She learns that Savitha might be in Seattle so she makes plans to get there. She enrolls in an English class and secretly obtains a passport. Soon she convinces the people she works with to let her be a chaperone when they ship girls off to other countries. Apparently, they make most of their money by selling girls to wealthy men in the Middle East and United States. After several years, a reunion with her friend no longer seems farfetched.

Women have long been viewed as a commodity in many parts of the world, particularly in impoverished Third World countries like India. There’s also a vast disparity between the wealthy and the poor in India which seems to be happening in the United States with the middle class disappearing. According to the United Nations Office of Drugs and Crime, “the most common form of human trafficking (79%) is sexual exploitation. The victims of sexual exploitation are predominantly women and girls. Surprisingly, in 30% of the countries which provided information on the gender of traffickers, women make up the largest proportion of traffickers. In some parts of the world, women trafficking women is the norm. The second most common form of human trafficking is forced labour (18%), although this may be a misrepresentation because forced labour is less frequently detected and reported than trafficking for sexual exploitation.”

This novel made me, and likely many other readers, realize that my situation could be far worse. I have very little to keep me going some days and can’t imagine being part of a sex trafficking operation. Girls Burn Brighter takes readers into that shadowy world. With the #MeToo and #TimesUp movements, there’s a cultural shift for women. If men can get away with taking advantage of women they’ll find a way. We’re developing better ways to combat it. We must support one another. We must speak up for injustices and brutality.

Shobha Rao will be at Brookline Booksmith on Wednesday, March 21, 2018.

FTC Disclosure: I received this book for review from Flatiron Books.

This entry was posted on March 19, 2018, 22:46 and is filed under Books. You can follow any responses to this entry through RSS 2.0. Both comments and pings are currently closed.