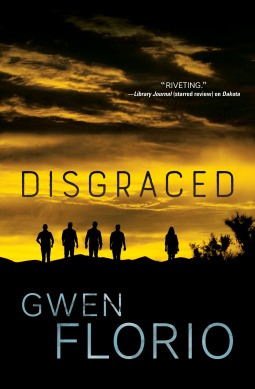 Disgraced is the third Lola Wicks mystery [Montana, Dakota] by Gwen Florio. This time around, Lola’s off on a road trip to Yellowstone with her five-year-old daughter Maggie and stumbles upon quite the interesting story. Her co-worker and friend Jan asked her to drive her friend Pal home from the airport. Pal just returned from Afghanistan. At the airport, she witnesses a soldier’s suicide. No one wants to talk about it. What could possibly be the reason? Pal remains sullen, reserved and takes to heavy drinking. She just won’t discuss anything. While she just returned from war she’s still remarkably closed off. This young woman holds many secrets that will slowly be revealed.

Using her investigative journalism skills she digs into this immediately. It involves a group of friends from a local Native American reservation who just returned home from Afghanistan. Until she moved to Montana, Lola worked as a foreign correspondent. She’s familiar with Afghanistan. There’s not much about the suicide in the local paper although Lola notices some connected stories—another soldier killed while on duty. She notes to herself that in most places this many casualties and ruined lives would spark further questioning—“But this was the rural West, with its staunch and unquestioning patriotism.” Author Gwen Florio always excels with establishing sense of place. She writes: “In fact, she thought, throw in a few flat-roofed mud houses, some flocks of shaggy, fat-bottomed Arabi sheep, and bearded men in pajama-like shalwar qamiz toting AK-47s, and Wyoming would look just like Afghanistan—a fact not inclined to endear the state to her.” You can almost feel the sand in your teeth.

Florio writes from own experience as an international war correspondent and someone who relocated from an Eastern city to a less-inhabited state in the West. She knows the journalism business so when Lola pitches this story to an online publication, Florio writes: “She’d have blown her first and almost certainly her last chance to write for one of the few organizations that paid freelancers real money for serious pieces.” Ah, journalism. Such a fickle but necessary professional field. No one goes into it for the money. It’s about truth, providing information and highlighting the fascinating aspects of our culture.

Although Disgraced deals with serious subject matter, I chuckled at Lola in her new role as mother—“she never though of herself as anyone’s caretaker.” It was something I wasn’t sure I wanted to happen when I read the two earlier books. I appreciated Lola’s single-woman/ independent status. But the bribing her daughter and inability to answer certain questions and having this smarty pants five-year-old along for the ride provides needed levity. And Lola does as Lola wants, child or not. Lola Wicks is my favorite fictional feminist journalist. She remains unmarried to Charlie, her boyfriend and Maggie’s father. She’s brave, outspoken and extremely independent. That’s why this potential story involving soldiers returning from Afghanistan appeals to Lola.

I will always read this series. One day I will visit Gwen Florio and we will ride horses amid the beautiful landscape. Read my interview with Gwen here.

FTC Disclosure: I received this book for review from Midnight Ink.

This entry was posted on March 15, 2016, 23:27 and is filed under Books. You can follow any responses to this entry through RSS 2.0. Both comments and pings are currently closed.