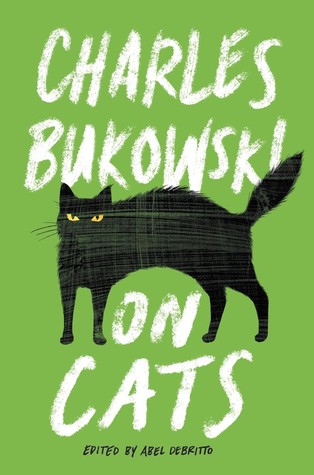 Some of the poems exude a slight disdain for cats and their nature. In most of the poems and stories it’s clear that Charles Bukowski truly cared about cats. When cats do their own thing he expresses awe and admiration.These poems scratch, spit, scowl and purr just like cats.

In the poem “a reader:” my cat shit in my archives/ he climbed into my Gold State Sunkist/ orange box/ and he shit on my poems/ my original poems/ save for the university archives. / that one-eared fat black critic/ he signed me off.” In one story Bukowski writes: “The Arabians admire the cat, look down upon women and dogs because they show affection and affection is, some think, a sign of weakness.” A poem starts: “the Egyptian loves the cat/ were often entombed with it/ instead of the woman/ and never the dog.” In another story he writes: “TV can make me ill in five minutes, but I can look at an animal for hours and find nothing but grace and glory, life as it should be.” In the poem “one for the old boy,” he addresses the death of one of his cats: “now he’s in the rose garden/ and I’ve heard a stirring march/ playing for him/ inside of me . . .”

The poem “exactly fine” begins: “the strays keep arriving; now we have 5 cats and they are tenuous, flighty, conceited, naturally bright and awesomely beautiful.” Bukowski even mocks himself with this line: “I dislike cute cat poems but I’ve written one anyhow.” In the poem “5 cats” he describes his cats. The poem “my cats” nearly brims with Bukowski-style emotions. He writes: “they complain but never worry./ they walk with surprising dignity./ they sleep with a direct simplicity that humans just can’t understand.”

On Cats will be a treat for any Bukowski fan. There are pictures throughout of his 10 cats. Sometimes Bukowski and a cat or his wife and a cat. He reveals that the couple treats the cats as children.

FTC Disclosure: I received this book for review from Ecco.

This entry was posted on December 1, 2015, 02:26 and is filed under Books. You can follow any responses to this entry through RSS 2.0. Both comments and pings are currently closed.