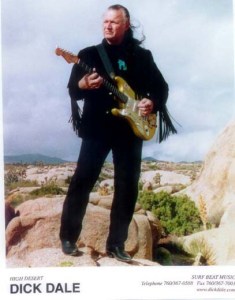 Summer is the perfect time to kick back and listen to some surf instrumental and “king of surf guitar” Dick Dale is the best of the genre. Born in Boston in 1937, Dick Dale grew up in Quincy. His Beirut-born father and Lebanese background influenced his music choices—drawn to Middle Eastern music and later surf instrumental. He learned to play piano at age nine and then guitar. His family then moved to California for Dale’s senior year of high school. He learned to surf and invented surf music in the 1950s– fast-paced, laid-back grooving guitar –that reflects the surfing experience. 78-year-old Dick Dale still tours because despite healthcare, he cannot cover all the medical expenses for damaged vertebrae, diabetes, renal failure and rectal cancer for which he wears a colostomy bag. Dale told the Pittsburgh City Paper: “I have to raise $3,000 every month to pay for the medical supplies I need to stay alive, and that’s on top of the insurance that I pay for,” Dale explains. “The hospital says change your patch once a week. No! If you don’t change that patch two times a day, the fecal matter eats through your flesh and causes the nerves to rot and they turn black, and the pain is so excruciating that you can’t let anything touch it. That has happened to me because I was following the orders of the hospital.”Currently for sale on his site: his 62’ yacht.

This entry was posted on August 12, 2015, 17:25 and is filed under Music. You can follow any responses to this entry through RSS 2.0. Both comments and pings are currently closed.