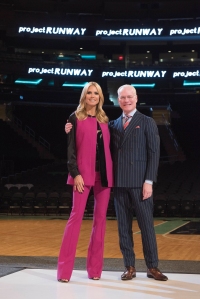 Host and judge Heidi Klum returns for the 14th season of Project Runway along with judges Nina Garcia and Zac Posen and mentor Tim Gunn.

Guest judges this season include:

This entry was posted on July 15, 2015, 15:21 and is filed under TV. You can follow any responses to this entry through RSS 2.0. Both comments and pings are currently closed.