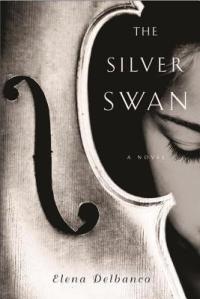 “Now she felt pure boiling rage. Who the hell was Claude Roselle to get her cello? Alexander was a bastard. She had been so loyal, so foolish. He had cared for no one but himself and his own great legacy. Now, were it in her power, she would destroy that legacy. She felt humiliated. Everyone would know he had taken the Silver Swan away from her and given it to a stranger.”

A mix of high-brow [distinguished cellists and a rare Stradivarius] and low-brow [affairs, questionable paternity, revenge] in a compact novel makes this an ideal summer read. Author Elena Delbanco knows the music world—her father was a prominent cellist who owned a Stradivarius—she knows this subject and utilized that knowledge to effectively advance the storylines. The only child of world-renowned cellist Alexander Feldmann inherits less than she expected when he dies. Instead his precious Stradivarius goes to a former student, an exceptional cellist named Claude Roselle. Delbanco writes: “She felt so painfully Alexander’s disloyalty, the punishment he had dealt her for failing to live up to his expectations, the final lacerating blow to what remained of her fragile sense that he had ever loved her. He had waited until he extracted every last drop of her devotion. Then, dying, he had delivered the coup de grace.”

In a bit of fated sacrifice, Mariana quit her promising musical career to care for her ailing father. Now she discovers that her father may have favored his pupil Claude to his daughter. Her arrogant father traveled the world and left his wife and daughter behind. He had a secret lifelong mistress in Europe. These events cause turmoil in Mariana’s life. Claude takes after his mentor. He’s equally devoted to music and doesn’t desire any familial or relationship commitments– “At thirty-seven, on the brink of international success, major opportunities and engagements, he did not want to marry or have a child.”

Alexander didn’t entirely support his daughter’s goals. “Alexander would say that women were simply not as musically gifted as men—women were never meant to have important careers in music. They didn’t have the creativity or endurance. The life was too hard.” How awful for Mariana. As I was reading I thought that either there would be a clichéd plot turn that I expected or that there’s a truly sinister character and motive. Turns out both. The music coverage and the vengeance aspect worked. Various twists and turns produce a delightful, brisk page-turner. An angry, embittered Mariana refuses to be taken advantage of ever again. A woman scorned by her father and then by Claude after they embark on a love affair, she takes matters into her own hands and decides to enact revenge on both parties. She’s clever, resilient and a layered character. Most everyone can relate to Mariana’s dilemma. Readers will root for Mariana to succeed and adore every minute of it.

purchase at Amazon: The Silver Swan

This entry was posted on July 10, 2015, 17:45 and is filed under Books. You can follow any responses to this entry through RSS 2.0. Both comments and pings are currently closed.