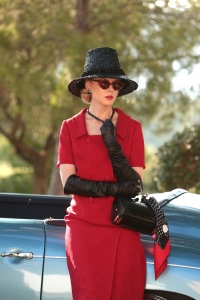 Grace of Monaco premiered at Cannes Film Festival with much pomp and hype from Weinstein Films in 2013. It’s the type of film that an Oscar winner like Nicole Kidman covets: playing an Oscar-winning actress who left Hollywood to marry Monaco’s Prince Rainier [played by Tim Roth]. There’s political unrest [France wants to tax or take-over Monaco—it was honestly quite confusing so I don’t know what was going on and wasn’t therefore interested] and an unhappy new princess. Grace Kelly starred in many well-known films such as Dial M for Murder, High Noon, Rear Window, To Catch a Thief, High Society and The Country Girl for which she won an Academy Award. Grace of Monaco covers the 1962 summer in which she considers Alfred Hitchcock’s offer to star in Marnie. She misses acting. She’s not happy with her perception as an American outsider. She states: “I don’t know how I’m going to spend the rest of my life in the place where I can’t be me.”

She’d been married several years [she married Prince Rainier, who she met at Cannes, in 1956 and already had two children Caroline and Albert at this time. Incidentally her family paid a $2 million dowry for her to marry the Prince. Grace Kelly grew up in a wealthy Philadelphia family. Also in 1918, France decreed that if Prince Rainier did not produce an heir Monaco would revert to France. These are facts that weren’t included in the biopic. That would have been way more interesting. Grace Kelly is a baby maker and pretty face for Prince Rainier. Nothing more than that. Marrying a Prince doesn’t look like any happily-ever-after that any young woman should covet particularly when you’re giving up your voice and your vocation.

the fabulous Parker Posey as Madge

Parker Posey stars as the questionable assistant Madge. Is she out for Grace Kelly’s demise? Posey shines in the buttoned-up role. As she always does. Paz Vega portrays opera singer Maria Callas with flair. Nicole Kidman plays wistful and disappointed well. However Kidman plays too schmaltzy rather than radiating Kelly’s elegance and sophistication. And we just don’t get under her ennui and dissatisfaction and ultimate desire to stay in Monaco. The preposterous script by Arash Amel [Erased] falls flat with unrealistic dialogue. The direction by Olivier Dahan [La Vie en Rose] proves listless. Not enough Grace Kelly and too much politics. There’s zero chemistry between Kidman and Tim Roth. What kind of twisted business arrangement to take an Academy-Award winner away from her career at the height of its success?

Grace of Monaco premieres on Lifetime Monday, May 25 at 8pm ET/PT.

This entry was posted on May 24, 2015, 00:14 and is filed under Film, TV. You can follow any responses to this entry through RSS 2.0. Both comments and pings are currently closed.