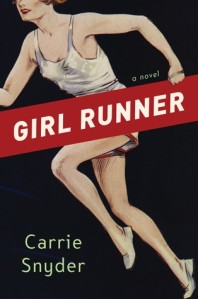 At the 1928 Olympics, distance runner Aganetha Smart wins the gold medal for Canada. It was the first Olympics in which women could compete in track and field events. It also was the last year for decades that the 800 meter run existed for women. Officials deemed it too taxing for women. Men continued to race in the event. Smart gained glory, enjoyed some years of celebrity and modeling contracts [likely the equivalent of endorsements today] then disappears from the national conscience until a young runner seeks her out when she’s making a documentary film about her own running career.

While author Carrie Synder created the character of Aganetha Smart, she conducted extensive research into the period and into female runners during that time. It starts a tad slow but it’s a fascinating novel about a woman who despite not competing continues to run well into her 80s. She adores the free feeling, escape and bodily endurance. Snyder writes: “Motion comes lightly to me. Maybe this is how others feel about calculations or equations, or about words, or about their feelings, about choices, about right and wrong.”

Traveling from present day to the 1920s, Snyder allows us to learn about Aganetha Smart’s life—her mom performed discreet abortions in their home and helped birth babies as a midwife– and her experience training and competing in the Olympic Games. There’s a scene where they’re traveling by boat to the Olympic Games in Amsterdam. The boat serving as an athlete’s village of sorts. Smart thinks: “I quietly agree with Glad. I am thinking myself quite sophisticated. I don’t need a boy, and besides, we girls are chaperoned up to our ears. Picture this: nearly seventy young people in top physical form confined on board a ship for a little more than a week.”

Girl Runner is about a determined woman who lived life by her own standards. “I am a woman unattached, a single woman of a certain age. I’m spared some complications. No one to nurse in declining years, for example. Also, no one to check my little eccentricities, developed over years of solitary habit.” When her running career ends she works for a newspaper and settles in writing obituaries until she moves back home to live in the family home with her sister.

This entry was posted on April 14, 2015, 14:16 and is filed under Books. You can follow any responses to this entry through RSS 2.0. Both comments and pings are currently closed.