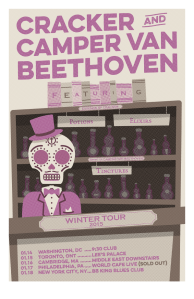 mark you calendars and buy your tickets GenXers and 90s alt-rock lovers: Cracker and Camper van Beethoven are heading out together. This show will warm you up this cold January. Get your tickets NOW!

Led by singer/songwriter Dave Lowery and guitarist Johnny Hickman, Cracker is best known for gold-selling 1993 album Kerosene Hat and the hit songs “Low” and “Euro-Trash Girl.” Lowery formed Camper van Beethoven in California in the 80s. Lowery’s a math whiz/techie guy when not playing in Camper or Cracker.

This entry was posted on January 10, 2015, 03:04 and is filed under Music. You can follow any responses to this entry through RSS 2.0. Both comments and pings are currently closed.