book review: All Days are Night 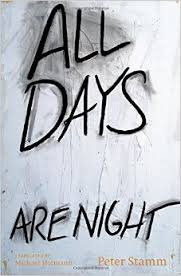 A popular television reporter, Gillian, wakes up in the hospital to a disfigured face and a dead husband. Matthias, her husband, drove the car drunk, hit a deer and caused the couple to crash.  She lost her beautiful visage and through numerous surgeries she’ll get a face back that was never hers. “It’s relatively straightforward to put an ear back, said the doctor, but a nose has a great many delicate blood vessels. We are going to have to build you a new one,” the doctor, hand mirror in his grip tells Gillian. “It doesn’t look very pretty at the moment, he said, but I still think it’s a good idea for you to take a look at it.”

She’s lost her identity. We’re all completely connected to our faces and bodies no matter what we think or desire. It’s a visual world. For some more than others. Gillian must deal with this loss and reconcile with whatever the surgeons reconstruct. Even her parents can barely deal with the new reality. Her mother can’t even look at her.  Reminds me of the facial transplants completed at Brigham and Women’s Hospital. Final result: not exactly you and not exactly the donor.

“Her life before the accident had been one long performance. Her job, the studio, the designer clothes, the trips to cities, the meals in good restaurants, the visits to her parents and Matthias’s mother. It must have been a lie if it was so easy to destroy with a moment’s inattention, a false move. The accident was bound to happen sooner or later, whether in the form of a sudden catastrophe or a gradual unraveling, it was coming.”

Not only does she have to deal with reconstructive surgeries but career loss. To rebuild, Gillian escapes both the city and the tragedy. She heads to her parents’ isolated vacation home in the mountains. Gillian encounters an artist, Hubert, from her past that may or may not feature into her future. The fight between Gillian and Matthias occurred because Matthias found naked photos of Gillian that Hubert— an interview subject– took.  Matthias drank too much at a party the couple attended and despite their friends’ concerns he insisted on driving. German author Peter Stamm revisits the encounters between Gillian and Hubert that caused tension between Gillian and her late husband.

As a cultural reporter, Gillian dipped into the arts and music scenes. An intriguing world combined with an electrifying profession. Hubert is a fame-fueled artist.  Neither Gillian nor Hubert is terribly sympathetic. However they are both relatable and intriguing. Losing one’s looks, one’s face, one’s identity in that manner. A ghastly, unimaginable thought. What would you do? How would you cope?

The novel beautifully traverses past and present. Stamm writes in an effectively laconic and melancholy style. He’s exploring appearances from various angles. It’s a gripping read about art and connection.

<em>FTC Disclosure: I received this book for review from Other Press.</em>

purchase at Amazon: All Days Are Night

This entry was posted on November 17, 2014, 17:13 and is filed under Books. You can follow any responses to this entry through RSS 2.0. Both comments and pings are currently closed.